TV FROM AROUND THE WORLD: "Rita" (Denmark) 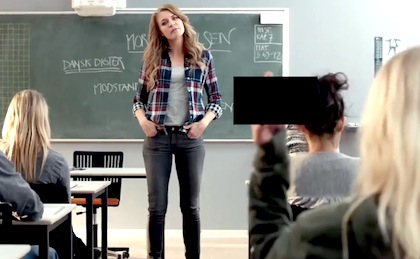 As an English teacher myself, I always enjoy watching films and television shows about that particular profession. Whether it’s silly “Key and Peele” sketches or sardonic takes on the education system and educators like in Bad Teacher, I am always interested to see how Hollywood interprets the life of a teacher.

Until recently, I had yet to hear of many international takes on the teaching profession. Although I have yet to teach abroad, I do find learning about other educational systems to be quite interesting. I was delighted to find the oddball sitcom from Denmark, “Rita”, which focuses on a rather quirky and freespirited teacher named (you guessed it) Rita. While Rita appears to be quite brash on the outside, the series slowly reveals that she has a heart of gold -- and does actually have a few problems of her own.

When Rita is first introduced, she helps to mentor a new teacher who is completely clueless (as first-year teachers usually are), offering sensible advice like the fact that the main guidance counselor has no idea what they’re doing and smirks when the new teacher’s class goes completely nuts. She bluntly tells her own class that a poem they read is about sex (which is hilarious and is often true when it comes to poetry) and berates her obligatory know-it-all student. She is also revealed to be having an affair with her principal and writes salacious graffiti on the walls of the restroom.

Despite Rita’s naughty behavior, she does have a soft side. She cares about her three children -- one of whom is getting married, one of whom is in the closet, and one that recently got dumped -- and on the side collects goofy troll dolls. She does her best to accept her son’s new fiancée, whose father she used to date (does it get any more awkward than that?) as well as support her other children. When the new teacher winds up in tears (which, again, inevitably happens to most first year teachers, so be nice to them!), she comforts her and even goes to bat for her. She even goes so far as to try to help her smarty-pants student by teaching her how to just be a kid.

I found “Rita” to be a funny take on not only the education system but on one woman’s strange life. It’s interesting to see how similar the education system is in Denmark to ours; no matter where in the world, there will always be students who need help and teachers will always struggle to reach them, while parents struggle to raise their kids and children struggle with their parents. “Rita” is a comedy with multiple international themes, which is why it works.

The promo below is in Danish, but you can get the gist... and apparently the Danes have the same swear words as us, so be warned!

You can catch “Rita” on Netflix!