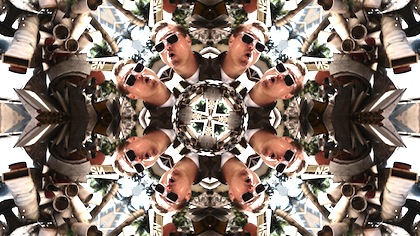 If you haven’t heard of Sean Flynn, then get ready because he’s about to be at the top of your list of directors who you would die work with!

Last week, Flynn’s life got a little bit more vibrant with the release of his most recent project with the Cold War Kids. He is indeed the mastermind and director behind the visuals of their brand new music video, “One Song at a Time”. Check it out below:

This flashy video showcases an array of unique imagery that takes a wild spin on telling this story. It’s no secret that Flynn and the CWK are both gifted with the touch of distinct creativity!

Flynn has been a fan of the Cold War Kids since the very beginning and had always believed that their artistic styles would mesh well together.

Here’s what Flynn has to say about the process behind the makings of “One Song at a Time”:

YH: What was it about Cold War Kids or "One Song At A Time" that made you sign on as the director for this music video?

SF: Earlier this year, they invited me to join them on tour as their photographer, which ended up being one of the most pleasurable experiences of my career. On tour, I shot two music videos for them. One for the song "Harold Bloom", and a tour video for their hit “First". When we got back to L.A., [Matt] Maust [CWK’s bass player and artist] and I were hanging out. He talked to me about doing a music video for the song "One Song at a Time” off their new EP 5 Quick Cuts. As soon as I heard the song, I immediately fell in love with the perfected chaos of the track. The many different levels of the song coupled with Nathan’s unique voice takes you on this melodic roller coaster. It took me emotionally and visually to so many different places all at once. The song is so much fun, and I saw it as an opportunity to do something completely different. I wasn’t sure if the guys would go for it at first, so I shot a few tests to show them, and they really liked it. They have crafted and know their style so well over the years, but what I love about them is that they aren’t afraid to step out of the norm and try something new. We talked about this a lot on tour.

YH: When you heard the song for the first time, what were the very first images you visualized before bringing the music video to life?

SF: When I first heard the track, it reminded me of how exciting and overwhelming L.A. can be. I’m a storyteller first [and] foremost, so I almost always stick to making story-driven music videos and typically avoid performance videos. Normally, I listen to a song and it creates a whole story that plays out in my head, which is why I typically write scripts for music videos lined in time codes instead of treatments. This time I just felt the song. I closed my eyes and just saw streaming streetlights and colors changing and morphing into different shapes. Basically what you see. Maust and I had just worked together on a time-lapse music video for a band called Hawai (one “i"), and he had the idea about doing a photo-based video for this song, which was a great idea. I took that and just went nuts with it. The idea was to bring the song alive so that you could feel it the way that I had experienced the first time I heard it and still do. I wanted people to see what it’s like to be inside my crazy A.D.D. brain and understand maybe why I’m too afraid to take hallucinogens. That would be a bad idea for me. I have too insane of an imagination.

YH: What was the shooting process like when filming?

SF: The shoot was really fun. It was a one-day shoot that we shot all over L.A., from Downtown L.A. to Malibu. I did have to do about two weeks of test shoots before we did the actual shoot with Nathan [Willett]. During the test shoots is where I learned that I had to match the movement of Nathan in order to make the background look like it was morphing around him. Nathan did have to learn the song at a third of the speed and learn how to move around to make it look the way it does. Nathan is amazing though. We did almost every scene in only one take, with the exception of when the camera would stop working. You aren’t really meant to take photos that fast for that long with those cameras, but Canon makes a great product, so they survived. The scene in the car was fun because I had the idea of shooting it at slow exposure, so when Nathan moved, it would create this crazy blur effect and the lights around him would create these long streaks of light flying around him. I lit Nathan in the back seat by wrapping rope lights around the front seat and top of the windshield. It was cool to see.

YH: The effects were incredible! Tell me about the process behind the editing of the music video and what makes your style unique.

SF: Thank you! Well, let me start by saying that I am not a VFX artist, but this time I felt I had to do it myself. Normally, I look for a tutorial for what I want to do, but there was nothing like that for this, because I was making it up. A lot of the VFX came from me screwing around and sending stills to Nathan and Maust, saying, “What do you think, too crazy?” With the exception of one or two shots, they were into it. The whole shoot was made of something like 72,000 photos, which is why every frame is so clear. The programs I was using aren’t used to that much info, so it took a very long time to make the video. My edit log said 855 hours of post. A lot of that is because we couldn’t shoot with green screen for the VFX to work, so I had to digitally paint each frame in Photoshop for many of the shots. It was a lot of work, but it was worth it. I think it took something like two weeks between each cut. Sometimes I would email the guys and say I can’t figure out how to do this one effect, and then go to sleep and figure out how to do it in a dream. You know you might be working too much when you start dreaming about it.