TV FROM AROUND THE WORLD: "La Familia P. Luche" (Mexico) 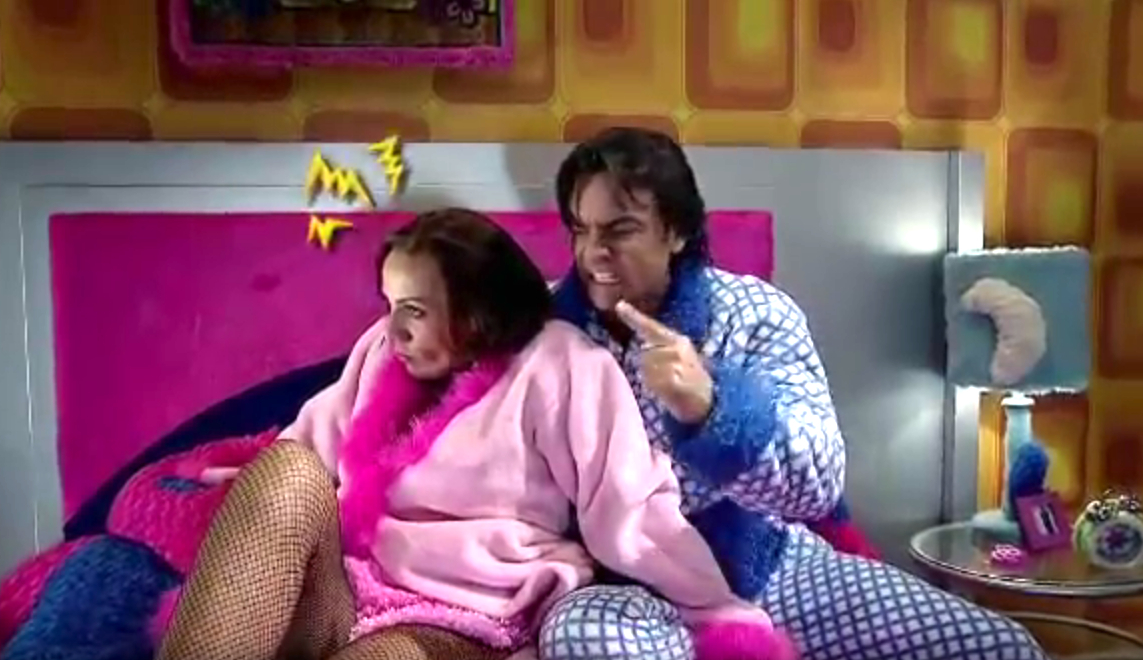 For months now, my students have been telling me to watch a Mexican sitcom called “La Familia P. Luche”. Described to me as a warped version of “Married with Children” (which is already pretty warped!) that is horribly offensive, I knew that at some point I would need to sit down and watch this strange take on modern life. And can I confidently say that I’m glad that I did.

The comparisons with “Married with Children” are pretty apt, although I would argue that the set looks like “Pee-wee's Playhouse” crossed with “Family Guy”. The show itself, which is available on Netflix, follows Ludovico P. Luche (Eugenio Derbez) and his family and their daily lives in the fictional city of Cuidad Peluche, where everything is wrapped in plush. The series opens with Ludovico making a tape that's not meant to viewed until he is dead, in which he explains how he ended up with his brash wife, Federica (Consuelo Duval). I love Federica. She makes Gloria from “Modern Family” look subdued. She constantly hurls endless insults at her husband, ranging from “animal” and “maggot” to numerous profanities, and may win the honor of the World’s Worst Mother. When she is introduced, she is wearing what appears to be a pink shag carpet from the '70s which she unapologetically rocks. We quickly learn that Federica and Ludovico have children (which is quite terrifying) -- their first child, Bibi (Regina Blandón), is shockingly normal (a feat which is treated like an insult to Federica and her husband), due to the fact that she didn’t actually grow up with her parents; instead, she was raised in a children’s hospital until her mother accidentally ran into her on her way to pick up nail polish. If this sounds horribly dark to you, then this show may not be for you. But if this sounds hilarious, then you will love the rest of “La Familia P. Luche”.

After the introduction of Bibi, the rest of the children's stories turn out to be just as bleak. Their younger son, Ludoviquito (Miguel Perez), hypnotized another boy at summer camp to become him and take his place in the family. His parents don’t even notice, despite the boy’s constant cries of “Yo Soy Ludoviquito P. Luche” ("I am Ludoviquito P. Luche"). This running gag reminded me a bit of Annyong (Justin Lee) on “Arrested Development”, who continuously says “Hello” in Korean and thus “Hello” becomes his actual name. Their third and final son is actually an adult, who, after being run over by Federica, wakes up with amnesia and believes he is their son.

“La Familia P. Luche” is surreal, insane, and offensive all at once, and for that reason I love it. It’s similar to a live-action cartoon, albeit with more profanity. I love that Federica and Ludovico seem to sincerely despise one another; unlike in other family sitcoms where it’s just playful, this is an actual strong dislike of one another. If you enjoy shows such as “Arrested Development”, the British version of “The Office”, and “The Simpsons”, then you will most likely dig “La Familia P. Luche”.

Here is a clip to give you a taste of “La Familia P. Luche”. It is in Spanish, so you may need a translator if you don’t speak Spanish (and even if you don’t, you can get the general gist; it’s a very visual show):