TRACK BY TRACK: The Neighbourhood 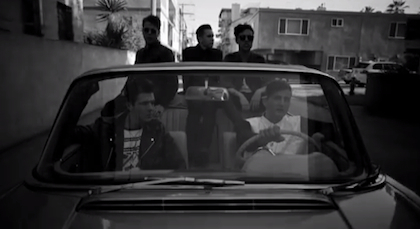 It’s only been a few months since The Neighbourhood visited the YH Studio, but to say that these guys from the Ventura County area have blown up in the eyes of the indie rock music world is very much an understatement. With the huge success of their hit single “Sweater Weather”, it really was only a matter of time before these guys did blow up, and their talent and swagger definitely warrant it. Now, on the cusp of another nationwide tour starting next month, we only saw it fit for us to review, track-by-track, all which is good about their debut studio album I Love You.

The cryptic, suspenseful, very modern rock 'n’ roll intro really does set the vibe for the entire rest of the record, with frontman Jesse Rutherford’s vocals making for a hauntingly good listening experience that fans, especially new ones, will more than love to hear.

Fave lyric: “Why would you tell me that it's fate / When they laughed at me everyday in my face?”

The central message of “Afraid” is one that almost all of us can relate to, because really, who isn’t afraid of their insecurities, and who hasn’t woken up scared of something they know they shouldn’t be? With more spacey, out-of-this-world instrumentals, paired with Rutherford’s smooth vocals, this track is the epitome of the band's style.

Fave lyric: “When I wake up I’m afraid somebody else might take my place…”

Looks like the pressure of some relationships has really gotten to the band, and that culminates into this 4-minute ode to paranoia and feeling like all eyes are on you. If you’ve ever felt that before, you’ll definitely know how good of a job this song does of embodying that message and letting it out into the open.

Fave lyric: “I let you find it on your own / Then I found myself alone.”

Seriously, even if you say you don’t know this song, you probably do know it, one way or another. This super-catchy tribute to a budding California love is everywhere, and with its brilliant use of both up-tempo verses and a smooth, mellow, almost beach-like outro, “Sweater Weather” is one of those feel-good pleasures that anyone from any genre can love and sing out loud to whenever it plays on the radio.

Fave lyrics: “The goosebumps start to race the minute that my left hand meets your waist.”

Although your usual don’t-listen-to-things-that-don’t-matter fare, “Let It Go” does a good job of mixing Jesse’s almost rap-like verses with a crazy killer instrumental backing. Not a lot of people can pull off the hip-hop/rap hybrid, so kudos to The Nbhd for making it work.

Fave lyric: “Shouldn’t try to fix it if it keeps getting better / Just let it go, forget it for ever and ever and ever…”

Short for "What Do You Want From Me?", this record’s essential message is questioning exactly what you’re doing wrong in a relationship, and why the blame is always being put on you versus them. Been there, done that, right?

Fave lyric: "Maybe you’re right / Maybe this is all that I can be / But what if it’s you and it wasn’t me?”

A personal favorite of the entire album, “Flawless” is all that is good about The Neighbourhood, mixing catchy lyrics, a modern beat, and a bittersweet message of love and being afraid of it that most young people can more than relate to.

Fave lyric: “I fell in love today / There aren’t any words you can say that could ever get my mind to change / She’s enough for me, she’s in love with me…”

Although, for most, the message of this song is super dark and super uncomfortable to almost talk about, The Neighbourhood, as usual, does an awesome job of making fears of awful things in your past real for listeners in a way they can relate to and want to listen to in a way that is almost comforting.

Fave lyric: “I’m thinking they’ll know just about everything / I bet they planned it all out…”

Almost dream-like, “Float” ends the I Love You album on a high note, talking mostly about not being able to stay “afloat” when thrust into life and its deep ends. Although you can sense that through Rutherford’s vocals that this song is about disappointment and not being able to measure up, there is nothing disappointing about ending the album with this awesome song.

Fave lyrics: “They show you how to swim / Then they throw you in the deep end / Well. I’ve been learning since / But it doesn’t mean I float…”

If you have the chance to see any of these songs performed live on tour, go for it! The Neigbourhood surely won’t disappoint.