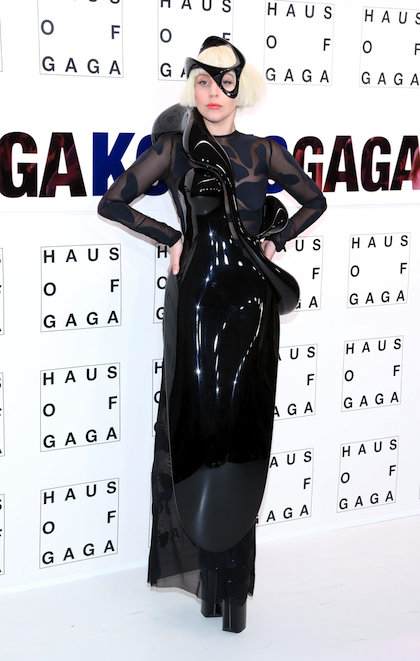 Although the high fashion, haute couture cover does suggest something that is a little outlandish and downright eccentric (it is Lady Gaga, after all), one of the most celebrated modern pop stars of our time does deliver to her fans all that they want on more on her most recent release – the highly-anticipated and much sought after musical work that is ARTPOP.

Many critics have had mixed feelings towards Gaga’s third studio release, but for what it is, it is an album any fan would more than love to hear, and although it probably won't change the world, it is nice to have one of the queens herself back on the scene doing what she does best -- turning heads and making great pop music.

And now, on the heels of her most recent performance at this weekend’s American Music Awards where she wowed the crowd with R. Kelly in tow for a presidential-themed extravaganza, Gaga is ready to showcase her latest project, and all that it is worth.

Let’s breakdown ARTPOP track-by-track, and see what has little monsters all over the world dancing in their seats and praising the pop star from New York.

The first track of the album was also featured on the soundtrack of theMachete Kills, in which Gaga also co-starred, and despite it being a hyper-electronic and emphatically weird song, it does a good job of showcasing what the entirety of ARTPOP will be like. It is also oddly reminiscent to her 2011 hit “Judas” in a way. Whether or not it is wrong to judge an album by one song, take a listen to “Aura” to see whether or not you’ll ultimately like or love ARTPOP.

Fave lyric: “I hear you screaming / Is it because pleasure or toil?”

Another overtly peculiar but oh-so Gaga track, “Venus” is not necessarily bad as it is a bit... predictable. We love her, don’t get us wrong, it’s just that instead of relying so heavily on synth tracks and electro gimmicks, she should be showcasing the stellar vocals that brought her to the limelight in the first place.

Fave lyric: “Uranus, don’t you know my ass is famous?!”

Standing for Girl Under You, “G.U.Y.” is, although sexually charged, a much better track than the first two in that it is somewhat breaking barriers with the way Gaga is literally saying “I wanna be that guy”, leaving interpretation open for how she and her fans view modern gender roles. Not to mention, it is super catchy!

Although it is disappointing that the rumored Rihannacollaboration for this track didn’t ultimately come to fruition, this record is still a banger in that, although you kind of do feel filthy when you listen to it, it is a guilty pleasure, and with its thumping beat, you can’t help but want to sing and dirty dance whenever it comes on. P.S. We’re still holding on to the hope that RiRi will do a remix to this song in the near future! It was MADE for the two of them.

Fave lyric: “I can’t help my mind from going there…”

A track with Gaga, T.I., Too $hort, andTwista looks like it has the makings of a hot mess, but if there’s one track on this album (or any album, for that matter) that bridges modern pop and rap, it’s this one. Twista is on fire with his rhymes, and paired with Gaga’s vocals and a trap music beat, this is a gem of a record.

The pinnacle of perfection on ARTPOP is this unforeseen (by anyone) collaboration with '90s R&B vocalist R. Kelly, and although it’s weird to imagine how these two working together even came about, we’re glad it did, because the result is the one track on the entire album that is pure pop perfection. THIS is the Gaga we know and love, and more fans should demand this kind of work from Gaga in the upcoming years of her career.

Fave lyric: “You can’t stop my voice because you don’t own my life / But do what you want with my body.”

The title track of the album, “ARTPOP” sounds very space-age and, unfortunately, is kind of a misfit on the entire repertoire of fantastic dance songs. If Gaga is saying herself that the concept ARTPOP could mean anything, then what exactly are we even doing listening to it in the first place?

Fave lyric: (literally) “My ARTPOP could mean anything.”

Where “ARTPOP” kind of brought your spirits and mood down with its silliness, swine will make you forget about it entirely and want to get up and dance. Although it sounds like standard dance club fare, it still doesn’t make it any less pleasant to move to.

Fave lyric: “You’re just a pig inside a human body.”

A track that pays homage to the fashion queen and Versace’s current Vice President can’t be bad, right? Right. It’s that perfect combination of pop-meets-haute couture that honors fashion in a way that, even if it’s a straight-up name drop, you can’t help but appreciate. Another perfect example of the kind of Gaga we know and love.

Fave lyric: “Tailor these clothes to fit your guilt / What’s your size?”

Another track that exemplifies perfect fodder for Euro dance clubs, “Mary Jane Holland” is another gratuitous dance track that, while being admittedly decent, is a bit too much, and starts to sound like the other millions of dance tracks that are already out for consumption.

Fave lyric: “Lady of the ‘Dam won’t be your slave tonight or the culture of the popular.”

The first single off of the album is exactly what it is -- the first single. Although it did get the attention it needed to in order to garner buzz and attention to the entirety of ARTPOP, it is by no means the best song. Needless to say, it is in keeping with the Gaga fashion/mentality of being in the spotlight, and who can argue with the fact that Gaga does deserve her spotlight?

Fave lyric: “One second I’m a Koons, then suddenly the Koons is me / Pop culture was is art, now art is in pop culture in me.”

Love her or hate her, you can’t deny that Lady Gaga has enough imagination and creativity to last ten lifetimes. Now it’s just a matter of balancing that with the talent that was given to her to showcase, and although ARTPOP isn’t quite perfect, it is certainly a step in the right direction for Gaga to become the next big pop music legend. She is most certainly, an icon in the making.