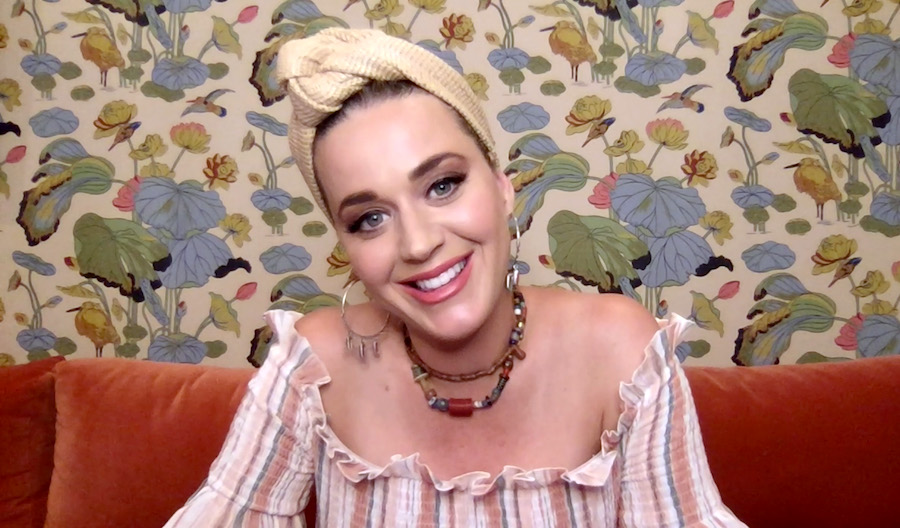 Katy Perry has had ups and downs throughout her career; however, there is no denying that she has one of the most unique voices and is one of the most talented singers in the pop scene. She has proven this to us once again with her new albumSmile. The album is definitely a comeback from her previous album, Witness, which was met with conflicting opinions from fans.

We are about to start a new era so I want to thank everyone who stayed with Katy Perry during Witness era, thank you for being with her in the ups and downs, in a couple of hours we all are going to have an incredible piece of art, enjoy it!#KatyPerrySmile#Smilepic.twitter.com/e4PnO3xypB

Smile is a poppy, '80s-inspired emotional rollercoaster. Katy manages to keep you “dancin' with those teary eyes” with her upbeat instrumentals and sad lyrics, yet she doesn’t shy away from expressing her stronger, happier side.

Let's break it down track-by-track!

Katy released “Never Really Over” in May 2019, however it still manages to be my favorite song off the album. This is one of the catchiest songs on the album with its fast, upbeat tempo, hopeful lyrics, and peaceful melody.

The music video is beautifully put together. It is very simplistic but in a cute, playful way -- and you get to see Katy smush her face into a glass door! It is super bright and colorful and has a retro style that is the perfect inspiration for your wardrobe or home makeover!

Favorite Lyrics: "Oh, we were such a mess / But wasn't it the best?"

Katy Perry jumped in strong with the start of this album! “Cry About It Later” is another addicting, catchy song. It sounds like it came straight from the '80s -- something Madonnawould sing! Not only does the catchy tune make you want to dance, the lyrics are super uplifting with Katy singing about not letting a heartbreak ruin her night.

The animated video, which is a part of her “The Smile Video Series”, depicts an animated Katy Perry as a witch. She starts off her night at home crying before flying off to a party. The video is adorable and sure to make you smile; the animation style seems super simplistic at first glance, but the level of detail put into it will leave you in awe! The video ends with Katy saving a woman from what seems to be a bad relationship and fades out on the two girls kissing. Plot twist!

The breathy, soft vocals in the beginning of this song are mesmerizing! Even though the lyrics could use some work, Katy grabs back the attention with her super energetic, rave-like chorus. This is the perfect song to dance to at a club, and just like her previous song, it is super uplifting and will have you forgetting about your troubles, at least for one night.

Favorite Lyrics: "If you wanna hide like your emotions / Heart can't break, it's already broken / If the sun comes up, don't even care at all..."

As much as I love the '80s pop sound that ruled the previous two songs on the album, Katy goes back to her soft pop style, much like in “Never Really Over” and some of her earlier work, and I can’t get enough of it! “Daisies” is so soft and beautiful yet shows Katy’s strength and resilience.

In this song, she goes right for her critics, addressing the way they wanted her to change but told her nothing was ever good enough. This song appears to be a direct response to the criticism she got for her album Witness. It’s super uplifting and empowering, especially for anyone doubting themselves and their talents.

The music video for “Daisies” is just as beautiful as the song itself. Katy explores different parts of nature, starting with a field of daisies before wandering around a stream, standing at the top of a hill and wandering around some canyons. She has a very natural, minimalistic look in this video, showing her growth and natural beauty. She also shows off her baby bump!

Favorite Lyircs: "They told me I was out there, triedâŸtoâŸknock me down / TookâŸthose sticks andâŸstones, showed 'em I could build a house / They tell me that I'm crazy, but I'll never let 'em change me..."

“Resilient” is strangely nostalgic to me; the beat reminds me of video game music, but in a good way! I love the way she slowly builds up the song, starting with a simple beat and slowly growing it, making it stronger — it shows her “resilience” and her growth.

The music video is another animated addition to her “The Smile Video Series”, this time with a stop-motion vibe to it. We see a character that resembles Katy Perry going through the different “stages” Katy herself went through, ending with her current long blonde hair, carrying a child and wearing a dress with daisies.

Favorite Lyrics: "‘Cause there’s no mistakes, just bends and breaks and friction..."

The strong techno beats in this song match the lyrics perfectly with Katy talking about not losing hope, staying strong, and persevering.

Favorite Lyrics: "A fortune teller told me, 'The power's in your mind' / You might see a cliff, but I see a way to fly..."

The title track of the album is another upbeat, happy dance song that will have you, well, smiling! Katy sings about getting back her shine, learning to not let the negative things in life such as rejection and hard times getting her down. This is definitely the most carefree, happy song on the album.

The video is just as fun and captivating as the song itself! It starts off with Katy putting the cherry on top of her pie before playing a circus-themed video game. Throughout the video, we see her wearing various clown-like, vibrant outfits with big colorful hair. She struggles with multiple challenges in the game while maintaining a smile and finally beats the game! The video ends with Katy smashing the pie in her own face, before revealing her pie-covered smile!

Favorite Lyrics: "Every day, Groundhog Day / Goin' through motions felt so fake / Not myself, not my best / Felt like I failed the test..."

“Champagne Problems” is another super retro song! The beats will have you dancing before you even know it. Katy Perry shows off her voice so well in this song, making it sound so effortless and smooth.

This song is all about pushing through all of the hardships in a relationship in order to get to the good part. It is a good reminder that there are going to be challenges you’ll have to face together, but there is always something worth reaching at the end.

This is definitely one of my favorite videos that she has done for this album. This is the first “The Smile Video Series” video that is not animated. Instead, we see Katy with gorgeous red hair, a long sparkly dress, and what appears to be a shiny, beaded headpiece. Katy sings and dances in front of a dark background with colorful smoke. Even though there isn’t much to the video, it is super visually appealing.

Favorite Lyrics: "Make-ups to the breakups / Times weâŸcouldaâŸgave up / We putâŸthe dirty workâŸin / So now we know it's worth it..."

“Tucked” is another favorite off the album! It is super catchy and will have you humming “Na, na, na / Na-na-na-na” all day long. This “love song” is all about that person you know you shouldn’t be with but can’t help thinking about. It’s hiding your feelings so nobody knows, but still going to that place in your mind where they are.

Even though the lyrics can be perceived as a heartbreak song, “Tucked” manages to be super happy, upbeat, and carefree due to the disco vibes and catchy tune.

Katy continues her “The Smile Video Series” with this comic book-style video, featuring her in Comic Book form this time! This super goofy video reminds me of her song and video “Bon Appétit” except this time her character is married to broccoli but secretly in love with a piece of candy. Scandalous!

“Harleys in Hawaii” is Katy’s tamest song on the album. It is super soft and calming, the perfect song to just chill out to while laying in the sun. It is what I would call the perfect “quarantine summer” song.

Katy has two videos for this song, one as a part of her video series and the other the official video. The latter shows Katy riding around Hawaii on a motorcycle; she stops at a bar for a drink, ignoring a fight behind her before getting onstage to sing. The visuals are gorgeous and look almost like a movie.

“The Smile Video Series” video is in the style of an old black-and-white cartoon showing a hula dancer sneaking off with a waitress to ride around the island on the back of a Harley-Davidson bike. The pair pass a man getting a traditional hand-tap tattoo, scenes of the ocean, and a meet-up with a group of female bikers.

“Only Love” is another one of my personal favorites off this album! It is another powerful, uplifting song, this time about wanting to leave this world with “only love”. Katy sings about how if she had only one day left to live she would “leave the hate behind” and appreciate her parents.

Similar to “Harleys in Hawaii”, this song has a very chill vibe, its very soft but has a strong and open sound. Katy is able to portray such an uplifting energy through her instrumentals alone.

Favorite Lyrics: "Oh, am I awake, am I sleepwalking? Tell me that / It's scary how quickly I lose perspective and I react..."

Katy Perry finishes the album on such a strong note. “What Makes a Woman” is all about appreciating women and their complexities, their individuality, and everything that “makes them a woman”.

The sweet lyrics combined with the soft guitar and the steady drumbeat make this song super calming while not taking away from the strong message. This is Katy’s most empowering song, one that every woman needs to hear once in a while to remind themselves that they are great and strong and complex in all of the best ways.

This is the last animated video in her video series, and my personal favorite. I love the art style — sketchy but complete. The gorgeous colors and unique imagery make it stand out. I also love the focus on women and showing off women of different backgrounds, careers, and skin colors. It shows that women really can be anything and everything.

Favorite Lyrics: "I feel most beautiful / Doing what the f**k I want..."

Katy Perry definitely shows off her true self in this album. Showing that she is human, she is strong, she is resilient, and she does not have to limit herself and what she does and the style of music she makes. Her freedom on this album means that she has a song for everyone! Whether you like modern-pop, '80s-pop, techno, disco, or a more chill sound, whether you need an uplifting song or a breakup song, Katy brings it all. And that is something to "smile" about!