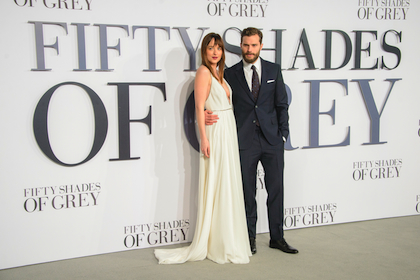 Whether you’re on the Fifty Shades of Grey bandwagon or not, there is no denying that the soundtrack to the film is a work of pure genius. One of the best things about the film, the soundtrack features an array of artists that each bring their own sensuality and flare to the overall tone of the film.

From names like Beyoncé and Annie Lennox toThe Rolling Stones and Frank Sinatra, the soundtrack engulfs your ears and fills you with passion. Here’s a quick track-by-track and including a couple videos of my favorites for you to listen to!

The perfect song that captures the main theme of the film. Annie Lennox’s version of the song  has a low, sultry sound with a burlesque instrumental keeping it sexy and classy.

Laura Welsh brings a pop alternative to the soundtrack. The song has a darker tone but the lyrics show the yearning for one another. Perfect for Ana and Christian.

God help us all. The Weeknd’s sensual voice is everything I need. I would tell you my favorite lyric but I love every word he sings. And the video! It will knock your socks (and perhaps other articles of clothing) off!

With a cool, seductive voice, Jessie Ware brings a lighter but still sensual sound with a jazzy flare. Have you ever been away from someone for a long time and you just needed to be with them, be next to them, be near them?

Ellie Goulding brings passion, romance, and sexiness in her own beautiful and classy way with this track. My favorite lyric: “I’ll let you set the pace / 'Cause I’m not thinking straight / My head is spinning around / I can’t see clearly anymore / What are you waiting for?”

Two words. Queen Bey. Her sensual tone mixed with the electro-pop mix makes a eerie but still sexy track for the album.

I am such a huge Sia fan, so seeing that she would be contributing to the soundtrack, I had to check it out. Her beautiful and mesmerizing voice fits the tone of the song is a way that makes my soul feel. The contemporary sound perfectly fits the soundtrack while still being a great stand alone song.

8. “Beast of Burden” – The Rolling Stones

This song takes a different tone from the rest of the soundtrack. It pumps up the mood with classic rock that gives the album a nice change of pace. The Rolling Stones always bring their own brand of sexy to any project.

AWOLNATION took a lighter approach to “I’m On Fire”, bringing a little folk to different aspects of the song and focused on simple beats and harmonies to really fill in the music.

And just when you didn’t think Queen Bey had anything up her sleeve. She goes and does this. Completely slowing down and making her fun, quick-paced, hip-hop song into this sensual and seductive track. I can’t even focus on doing anything when I listen to this song. Best decision they made was making this song the opening song in all of the teaser trailers. Oh man, and that ending!

Definitely a unique and different sound than any other song in the album, taking it old school with a Frank Sinatra classic. It’s a perfect song to keep to the theme without being too overbearing.

This is actually one of the more upbeat and happier songs of the album. It has an Ellie Goulding kind of sound with a lower female voice. The song is deep and full of life, so to speak. Favorite lyrics: "And if one last night is all that we’ve been given / Let’s live it like we care.”

His falsetto mixed with the echoes and the lyrics of course put this song on my #babymaking playlist. And if you really listen to the lyrics, you can just see Christian singing this song to Ana.

Another beautiful female voice, this time taking the viewpoint of Ana and her slowly depleting innocence. This song encompasses all the feelings Ana has about Christian and her longing to help him and love him.

Purely instrumental, but Danny Elfman is still able to tell a story without lyrics. To be honest, it makes me have some flashbacks toTwilight. (I wonder how that happened?) But nonetheless, it’s a beautiful instrumental piece that brings the film together.

Another Elfman instrumental but slower and more calm. A cool and classic sound to end the film.

Cheers to the curators of this Fifty Shades of Grey soundtrack. It is truly a work of art. Each song fitting together as a beautiful artwork piece conveying the film’s theme of lust, seduction, and romanticism while each track is able to stand alone on its own.

Which one is your fave?