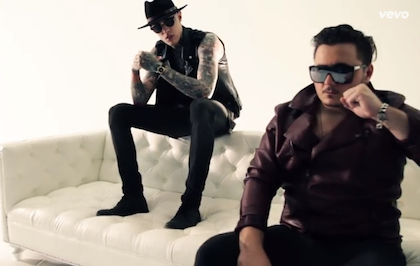 "If all is fair in love and war / Then what are we fighting for?" Um... how about some new music, Metro Station?

They've been broken up for over four years, but luckily for us, Trace Cyrus and Mason Musso are back at it once again with their release of their newest single, "Love & War", a fun, danceable pop-punk track, and Trace and Mitchell sing with their signature fusion of yelling and punk version of rap. But first... Let's take a walk (or, should we, say dance?) down memory lane with this song:

If that hasn't gotten you nostalgic for the days when Scene Kings and Queens reigned over the land Top 8s, then we don't know what will. Luckily for us, our boys are back in action, and it doesn't seem like they'll be leaving us again anytime soon.

"After over four years of being apart, fans -- and even myself -- thought this would never happen,” Trace Cyrus told Billboard. “I’m extremely excited to be making amazing music with Mason as Metro Station again. We started this band together and it only feels right we finish what we started."

Although Metro Station hasn't technically been completely gone (Mitchell was releasing solo music under the Metro Station name,) it's good to have you back, Trace.

The duo is currently getting ready to kick-off The Outsiders tour with The Ready Set this fall. It'll start on October 21 in Salt Lake City, Utah, and end November 22 in San Diego, California. Check out the rest of the tour dates here.

Now, back to "Love & War": the song tells the story of a confusing and destructive love wIth lyrics like "We shared a kiss, locked lips // It's so confusing, baby // I'm on her mind, she said she loves me maybe," and "I thought I was the only one // Her love's like a loaded gun."

Watch the video for "Love & War" below and let us know what you think in the comments!