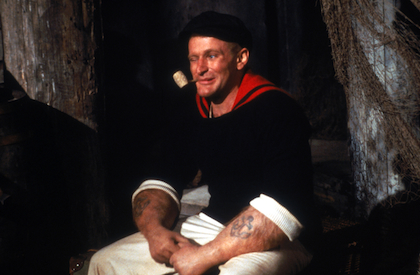 Robin Williams was finally laid to rest this week, but the legacy he left behind still remains for us to enjoy. He had a successful career spanning decades and has entertained people of all ages around the world. He may be gone, but he will continue to live on in our hearts and minds through the films he made. Netflix now has several of his films streaming to help you relive the good times.

Based on the popular comic strip and cartoon character “Popeye”, this musical comedy follows Williams as the title character seeking out his long-lost father. For those of you who don’t know who Popeye the Sailor Man is, he’s a sailor who is fueled by spinach to help him beat down people victimizing him with his bare hands. The love of his life is a skinny brunette woman named Olive Oyl, played by Shelley Duvall, who is set to marry the town’s brutish shake-down man, Captain Bluto, who terrorizes the town in the name of a mysterious villain named the Commodore. Can Popeye defeat Captain Bluto and the Commodore? Will Popeye find his father? How can Popeye win Olive Oyl’s favor? Tune in to watch.

The Adventures of Baron Munchausen (1988)

Directed by the only American member of Monty Python, Terry Gilliam, this adventure comedy is a treat for any fan of fantasy or Monty Python. The film is based a German nobleman from the 1700s named Baron Munchhausen, who was said to have told tall tales about his own wartime exploits against the Ottoman Empire. Robin Williams is not the star, however, and does not play Baron Munchausen. Instead, he plays a supporting role as the King of the Moon, but is billed as Ray D. Tutto.

Williams worked once again with director Terry Gilliam, except this time gaining a starring role alongside Jeff Bridges. The film follows Bridges as a shock jock named Jack Lucas, who says some insensitive comments on-air which cause a caller to go on a mass murder spree at a Manhattan bar. Time jumps ahead three years later to find Lucas now working in a video store with his girlfriend Anne. He still hasn’t gotten over the actions his words caused and is a drunken mess. During a bender one night, he thinks it’s a good idea to commit suicide, but before he can, he is mistaken for a homeless man and is attacked by thugs. He is rescued by Parry (Williams), a delusional homeless man on a mission to find the Holy Grail. Learning that Parry’s wife was murdered on that fateful night Lucas caused some years ago, and as a result sent Parry’s life into a complete downward spiral, Lucas sees helping Parry as a way to seek redemption.

This Steven Spielberg-directed live action Peter Pan sequel was a massive success in the box office. The film takes place after the events of the original Peter Pan and surmises that at some point in Peter Pan’s future, he actually leaves Neverland and grows up to become a man named Peter Banning, who works as a corporate lawyer, has a wife and kids, and forgets all about Neverland. When his kids are kidnapped by Captain Hook (Dustin Hoffman), Peter is flown back to Neverland to regain his role as Peter Pan and the leader of the Lost Boys. None other than Tinkerbell, played by Julia Roberts, helps Peter remember who he really is. Can Peter save his kids from the dastardly Captain Hook? Start streaming to find out.

A great film about the worst board game ever. A young boy named Alan Parrish and a young girl named Sarah Whittle play a game named Jumanji that Alan finds after hearing drum beats coming from a construction site. A word of advice -- if you ever hear a board game playing drum beats, don’t just walk away from it… RUN! Alan ends up getting sucked into the game and is lost in a dangerous desolate jungle for 26 years. Siblings Judy and Peter start playing the game when they find it at their aunt’s house. Seeing that they are picking up the game he and Sarah played, Alan (now in full-bearded Robin Williams form) joins in to make it back to the real world. Will Alan make it out of the game? Will Judy and Peter take his place? The stakes have never been higher!

Robin Williams stars as Armand Goldman, the owner of a Florida drag club called The Birdcage. His partner, Albert, played by Nathan Lane, is The Birdcage’s most featured drag queen. Armand’s son, Val Goldman, announces his intent to marry a conservative Ohio Senator’s daughter, Barbara Keeley. Barbara lies to her parents about Armand’s lifestyle to help him and Albert appear normal in front of her father, Senator Kevin Keeley, played by Gene Hackman. Lies and deceit ensue hilarity, but mainly much of the film could be resolved if anybody owned a cell phone, meaning there is no way this film could be made today unless it was set in the past. What do I mean by that? You’re going to have to watch to find out.

Written and directed by stand-up comedian Bobcat Goldthwait, this film follows Robin Williams as a high school poetry teacher named Lance Clayton, whose true passion is writing novels, but everything he has ever written has been rejected. He teaches at the same school that his under-achieving son, Kyle, attends. Kyle is a pretty unpopular and loathsome teenager at the school and hates his father. One night, Lance discovers that his son has died due to autoerotic asphyxiation, which is an embarrassing way for anyone to die. To save his son from the judgment of the public, Lance writes Kyle a suicide note, giving a new meaning to the title World’s Greatest Dad.

Movies aren’t the only productions that Williams can be seen in on Netflix. He can also be found guest-starring in the Season 9.17 episode of “Law & Order: SVU” entitled "Authority". In it, he plays the role of Merritt Rook, an audio engineer and advocate against authority. It is one of the most entertaining episodes I have ever seen of any of the “Law & Order” shows. Williams is great in his performance of Merritt Rook, and at times it’s conflicting as to if he really is such a terrible guy or not.

Williams also guest-starred on the critically acclaimed FX comedy “Louie”, a semi-autobiographical television show entirely written, directed, and edited by stand-up comedian Louis C.K. Just like how Louis plays himself on this show, Williams does so in this episode as well. It’s a very sweet episode in which Williams and Louis spend an afternoon together after being the only two attendees at a mutual friend’s funeral. The episode, entitled “Barney/Never”, is the sixth episode of the third season.

We’re all sad to see Robin Williams go. He was a great entertainer that will continue to do so for generations to come. Rather than focus on the tragedy of his passing, how about we relive the good times and laugh with him on Netflix tonight?