The Shakespearean Roots of Fox's "Empire"! 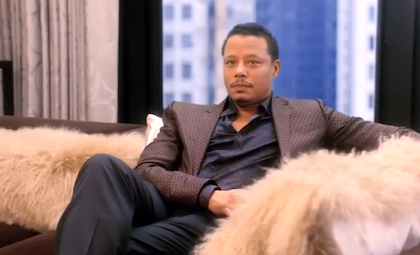 I can say with utmost confidence that the best new show of the season is Fox’s “Empire”. Any show that has Taraji P. Henson show up wearing revealing lingerie to a family dinner and school her ex-husband’s new squeeze on the proper size of booties is quality television.

What many don’t realize about “Empire” is that its origins are actually based on classic dramas. The show’s plot, as revealed by the show’s creators Lee Daniels and Danny Strong, derives from a combination of Shakespeare’s King Lear and James Goldman’s The Lion in Winter. “Empire”'s plot centers around successful rapper/record label CEO, Lucious Lyon (Terrence Howard), who, after being diagnosed with ALS, must decide which of his three sons will inherit his music empire. As if that wasn’t troublesome enough, his ex-wife Cookie (Henson) shows up after spending 17 years in prison demanding her half of the company. The show has made explicit references to both plays, as well as to Shakespearean plays in general. Here are just a few of the references:

1. Episode 6, entitled “Out, Damned Spot!”, quotes one of the most famous lines from the Shakespearean tragedy, Macbeth. The line is spoken by Lady Macbeth, as she (metaphorically) tries to wash the blood off her hands after she and her husband killed King Duncan. The quote refers to Lady Macbeth’s conscience as she is reminded of how she cannot erase her guilt and dirty deeds. In the show, the quote could be in reference to the fact that Lucious (Terrence Howard) killed his friend Bunkie, and he is now constantly being reminded of it. The "damned spot" continues to follow him no matter where he goes. It could also refer to Cookie’s (Henson) love for Lucious, whom she just can’t let go.

2. Speaking of Lady Macbeth, it seems that “Empire” has a Lady Macbeth of its own in the form of Rhonda (Kaitlin Doubleday), Andre’s (Trai Byers) wife. She is the one who convinces him to turn his brothers against each other so that he will be able to take over the "empire". If that’s not scheming, than I’m not sure what is!

3. Episode 3 has another title that is a quote from a Shakespeare play. “The Devil Quotes Scripture” is a direct line from the controversial play The Merchant of Venice, spoken by Antonio as he discusses business with the crafty Shylock. The quote essentially means that a liar can look deceptively honest, especially when they hide behind religion. The quote is most likely in reference to the fact that Lucious plans an elaborate funeral for the man that he just killed and lies to everyone around him about Bunkie’s fate.

As for the show’s plot, “Empire” pulls elements from both plays. In The Lion in Winter, Henry II brings his family together on Christmas Eve, 1183. He is reunited with his ex-wife, Eleanor of Aquitaine, whom he has had imprisoned for many years and has just been released, as well as their three sons: Richard, Geoffrey, and John. They are also joined by King Phillip II (who is the son of Eleanor’s ex-husband) and Alias, who was originally betrothed to Richard, but is now Henry’s mistress. The characters descriptions pretty much fit each of the characters on “Empire”. Henry, like Lucious, is manipulative and thinks fast on his feet (it’s no coincidence that Lucious’s last name is “Lyon”). Eleanor and Cookie are both beautiful, loud, and feisty; both are willing to fight for what is theirs and have no problem with taking their men down, even though they still love them. John, like Hakeem, is the youngest and most spoiled son; neither son really possesses much of a work ethic and are both used by their fathers. However, “Empire” isn’t just based on The Lion in Winter -- there are even some elements of King Lear present as well. In the play, King Lear is ill and must decide between which of his three daughters to take over his empire. After rejecting his youngest daughter because she does not have words that can describe how much she loves him, his two elder daughters betray him and feud over the kingdom, leading to Lear’s insanity. While the play differs a bit from “Empire” (one of King Lear’s daughters sincerely loves him while Lucious's sons appear to just want his empire), there are many similarities between the two leads. Neither party makes the best decisions, and both progressively slide into further danger because of their mistakes.

As the season continues, I will be curious to see what other Shakespearean and dramatic elements will pop up. I would love to see a little bit of Othello make its way in (I’m surprised none of the characters have borrowed a revenge plot from that play), as well as some Tennessee Williams characters. If the show wants to go even crazier, they need to throw in a Stanley Kowalski.