TV FROM AROUND THE WORLD: "My Love From Another Star" (Korea) 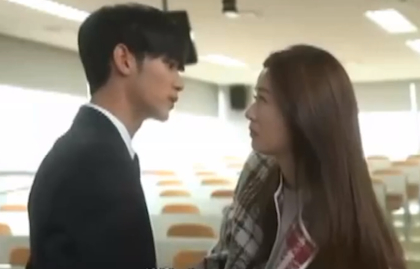 I have always had a deep appreciation for Korean dramas. I love the fact that in nearly every Korean drama I have seen, the main heroine gets eye cancer, runs out into the street, and her lover rushes out to push her away just in time -- and consequently ends up getting hit by the truck himself.

Since “Wentworth” was rather heavy, I decided to pursue a lighter fare this time around. The Korean drama “My Love from Another Star” (now streaming on Hulu) has been one of the most popular dramas to ever air in South Korea and China. Thanks to its success, the show has spawned its own fashion and accessories line, as well as an absurd amount of merchandise. The show is even coming to the States -- ABC recently ordered a remake for American audiences (the original creator, Park Ji-eun, will be involved with the remake).

Having now watched the original “My Love from Another Star”, I can see what all the hubbub is about; the drama is undeniably charming. Starring Jun Ji-hyun (My Sassy Girl) and Kim Soo-hyun, the drama follows Do Min-joon (Soo-hyun), an alien who landed in Korea during the Joseon Dynasty (over 400 years ago) from another planet. After spending centuries living alone on Earth (and after amassing an impressive array of degrees), Min-joon has become rather melancholy and distant. He learns that he will get to return to his home planet within three months... until he faces a roadblock in the form of his next door neighbor, an infamous drama actress. Cheon Song-Yi (Ji-hyun) is a blunt and rather vapid star who attempts to connect with her fans via Twitter only to consistently prove that she’s not all that bright. Still, she has reasons for her problems -- her mother is a horrid leech who demands money from her (five million dollars, to be exact) and doesn’t have many real friends (her best friend is deeply envious of her). Through fate, the two fall in love, and Min-joon must make a choice: his home planet or his true love?

“My Love from Another Star” hits all the right rom-com notes, with a bit of sci-fi thrown in for good measure. Ji-hyun impressively makes her character -- who could just be a shrill caricature -- into a believable and sympathetic woman that you can’t help but root for. Having only seen Ji-hyun in the rom-com My Sassy Girl, I didn’t know that she had dramatic acting chops, and I frequently forgot that it was her. Soo-hyun and Ji-hyun have the right amount of chemistry, and the show never veers into oversexualized territory. It’s truly the perfect light drama to watch.

Check out the first episode below: