The Origins of Baby Groot! 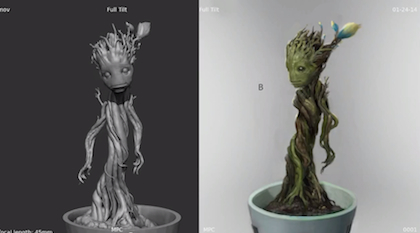 It turns out director James Gunn adores Baby Groot just as much as we all do. In a recent featurette on the Guardians of the Galaxy blu-ray, Gunn reveals that Baby Groot was the last character to be created (but he was the one to steal our hearts). The rest of the film had already been shot and was ready to be shown, when he and his fellow crew decided to create Baby Groot -- or, as Gunn adoringly calls him, “a stick with a face”.

It turns out that there were two baby Groots: the Baby Groot that we have all come to know and love, and a more simplistic version. The latter was quite literally a stick with a face (hey, that’s his nickname!), while the former took a little more time to design. Thankfully, the crew set to work and all had the same vision for the new and improved Baby Groot. For our entertainment, the crew released a preview of the feature:

Speaking of dancing, the rest of the cast attempted to show off their moves as well (none were as sweet as Baby Groot’s). In the film, Star-Lord challenges bad guy Ronan to a dance-off, which completely threw him for a loop. Yet the other Guardians wanted to jump in on the action too, and in a scene that never made it into the finished film, the Guardians pulled off some pretty dope moves. I personally think that Dave Bautistia (as Drax) came out on top, as he busts out some old-school chicken wing action:

Which character do you think had the sweetest moves?