'The Hunger Games': The Next Great American Play? 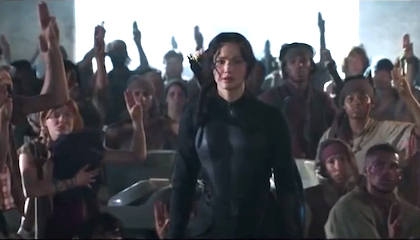 If a possible theme park, the next two films, and general Hunger Games mania isn’t enough to satisfy for your lust for kids fighting other kids to the death, then rest assured that there are more chances to have the odds be ever in your favor. In 2016, a stage production of the hit book and film will be released. Lionsgate, alongside Dutch producers Imagine Nation and U.S.-based Triangular Entertainment, will helm the project, which is bound to use more fake blood than any other stage production since Sweeney Todd.

The production is set to be co-produced by Broadway veteran Robin de Levita. Last year, de Levita released Soldier of Orange, a Dutch musical that put the audience in a 360-degree spinning theater which transported audiences from set to set. de Levita is looking forward to putting audiences in a “truly immersive” experience. I’m not entirely sure what this means, but hopefully this doesn’t mean that the audience will be put through a real-life reaping.

Now that The Hunger Games is officially hitting the stage, it's only a matter of time before it then becomes a musical. It will probably be titled KATNISS! and feature numbers like:

- Effie Trinket’s Lament #2: Katniss Has Dressed Up but is Wearing the Wrong Color

Oh the possibilities are endless. But for now, we'll have to see how de Levita's production plays out first!

Would YOU go see The Hunger Games as a play?

Don't forget to see the third installment of the film series, Mockingjay - Part 1, in theatres starting next Friday (Nov. 21)!