'The Good Dinosaur' Trailer Promises to Up the Ante for Pixar! 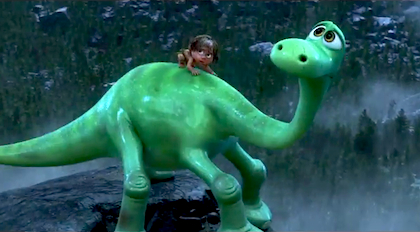 Okay Pixar, what’s the deal here? You came out of the corner swinging for our hearts with Inside Out, a beautifully amazing movie that takes you on the sort of thrilling journey mixed with meaning that we’ve come to expect from you when you’ve had your morning coffee. But it seems like you’ve decided to up the ante by assaulting the tear ducts of the world even further this November when you releaseThe Good Dinosaur. And, no, I’m not crying, thankyouverymuch. It’s just.. allergies, or... or... this onion that I’m now peeling out of nowhere. Yeah, that’s the ticket.

The first thing you’ll notice -- aside from your sudden need to grab a kleenex or two -- is the absolutely incredible job the mad folks at Pixar have done with creating the world of the film. I’m not one to toss around the word "photo-realistic" like millions of haphazard folks out there on this great big planet of ours might, but daaammmnnnn! That is one photo-realistic world that Pixar has got going on in this flick. And, of course, the immediate contrast that you are probably noticing is that the Good Dinosaur in question and his human companion seem to be animated in a more "traditional" style. Even some of the other dinosaurs seen in the trailer have what scientists have now deemed as a "goofy sort of look" to them that also stands out from the wondrous and photo-realistic (that’s right, I said it again) backdrop of this movie. This could merely be the film’s way of visually communicating the innocence and sweetness at the heart of this story, which is amplified by our protagonists’ relationship with a world that radiates beauty, but also danger, mystery, and an enormity that can be truly hard to grasp at times. Or maybe they were just, you know, trying out something new. Okay, highly doubt that the decision to create such a radical visual style was flippant one, and I guess we’ll find out more when the film hits theaters this Thanksgiving.

We all know that it was an asteroid striking the earth that caused the extinction of the dinosaurs. (Well, at least that is the prevailing theory). What this movie presupposes is: maybe it didn’t? That’s right, in this film, our good friends (I’d like to think that we’d be friends) the dinosaurs have been removed from the extinction list and placed in the center of their very own Pixar movie. One dinosaur in particular, who apparently flaunts the reputation of being good, befriends a small human child, and that friendship becomes the catalyst for the many heartwarming, funny, and soulful adventures that this trailer boasts. Well, for my money the film is a hit, and I’d like to personally nominate it for Best Animated Feature of 2015 (I can’t really do that, but a guy can dream). Obviously, this is a finely crafted trailer, and one that has created some high hopes in regards to the film’s ability to make good on its promise of excellence.

A turkey dinner is now second on the list of awesome things to look forward to at the end of November, as Pixar has trumped it with an offering that’s nearly 100% tryptophan-free! I’ve got my ticket in hand (in a spiritual sense, that it is), and I’ll see you all at the movies.