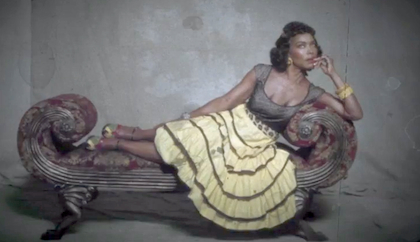 Do you like going to the circus? Do you like freak shows, or "sideshows" as they were originally called? Do you like killer clowns? If you said “yes”, to any of these questions, then you will be happy to know that FX’s hit anthology series “American Horror Story” is packing up their caravans, gathering their performers and bringing their show back to 1952 in Jupiter, Florida!

Enough of me talking about the trailer… Check it out now!

Looks pretty spooky, huh? The song is also chilling yet whimsical, which gives me the notion that this season will be a more like the last season (“Coven”) rather than the ultra dark and creepy first two seasons (“Murder House” and “Asylum”). Notably absent from the trailer but confirmed to appear this season in unspecified roles are regular “American Horror Story” actors Frances Conroy, Denis O’Hare, and Emma Roberts.

Like always, the trailer gives little hints for what is in store with each character. Rather than list all the things I personally saw, how about you try to spot things for yourself? I will say this, though: I NEED to know who the little person following Jessica Lange and keeping her dress from scraping the ground is! Could it be World's Smallest Woman, Jyoti Amge, who was recently announced as an addition to the cast?

In any event, I can’t wait for “Freak Show” to start up! It’s become a fall viewing tradition that my family and I look forward to every year. How about you? Is your blood racing to see “American Horror Story: Freak Show”?