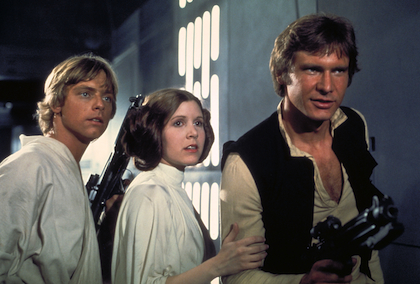 Everybody is still talking about the first trailer for Star Wars: The Force Awakens. Including us, apparently. As we've already stated, it succeeds in getting us pumped for the new installment without giving too much away. Which should be the primary purpose of any movie trailer, should it not? As far as the Star Wars franchise is concerned, though, it seems like they've always had a knack for showcasing the best of the film in the trailer to truly build buzz and excitement. Let’s take a moment, then, to remember the trailers for the first Star Wars films, back to the first time we trekked to a time long, long ago in a galaxy far, far away in the bygone year of 1977.

That certainly was a trip back in time. Admittedly, if it was released today, the graphics would be considered anything but impressive, but back in 1977, people probably thought space ships were flying right over their heads. And yes, it inspired me to throw on my copy A New Hope right now! The one that has Han shooting first…

Personally, Empire Strikes Back is my favorite installment in the Star Wars franchise. So I don’t need a trailer to get me psyched to watch this flick, but once again it accomplishes it all. There’s explosions, trippy '70s editing sequences, and the promises of a showdown with Darth Vadar. Where was the promise of a showdown with Vadar in the new trailer, huh? Oh that's right… he’s dead.

Return of the Jedi showed us a huge difference in the graphics. From A New Hope to Empire Strikes Back, there wasn’t too big of a change, but Holy Skywalker, did you see those speeders? And that -- that extremely epic battle on the new Death Star? Let’s not forget about those adorable teddy bear people! Oh wait… I think this trailer did.

No matter what fans may say about the prequels, you’ve got to admit, when this came out, everybody was losing their minds! Maybe even more than they are right now. This Phantom Menace trailer had it all, with a satanic dude with double light sabers, sleaker looking space ships, something called pod racing, and Baby Darth Vadar! I know when I saw this trailer, I might have lost control of my bowels… way more than I have with this new one. Okay, I was eight or nine at the time, so cut me some slack.

So dramatic with all those fade-to-blacks, but they definitely put their new special effects to full use with Attack of the Clones. You got jetpacks, huge armies, and deep space travel through asteroid fields like nothing you ever saw before. Even Yoda was etched from a computer, which sounds pretty promising for a fight perhaps.

From the start of the trailer, we can tell where this one is going, but we all already knew Anakin’s fate since Empire Strikes Back. What we didn’t know was who, why, and how. This teaser trailer for Revenge of the Sith gave us the promise of tying everything together, and we even got to see Yoda whip out his lightsaber. Now that’s something we’ve all been waiting for for a long time.

Okay okay, I’LL SAY IT -- The trailer for The Force Awakens might blow all the other ones away. I have no idea what in Hoth is going on, but I like it. I have so many questions, all of which have been asked all over the Internet, so I’ll spare everybody and end this right here…

What is up with the menage à trois lightsaber? I don’t know why, but I like it.