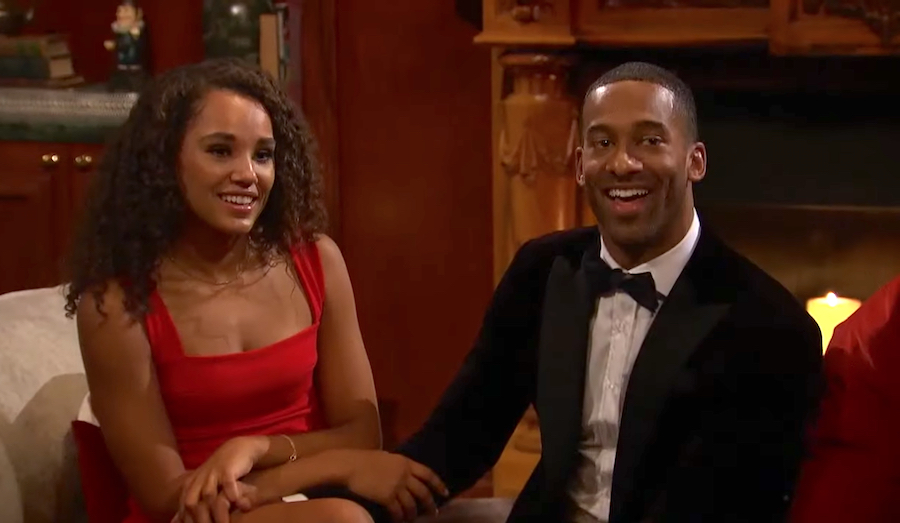 In the 6th episode of Matt James’s season of “The Bachelor”, twists and turns kept us on the edge of our seats! Complete with tears, yelling, and a shocking new arrival, last night (February 8, 2021) was a night unlike any other this season.

Here are the top moments from the episode!

After last week’s cliffhanger with MJ andJessenia being invited to a two-on-one to be confronted by Matt himself, we finally see an end to the drama. Matt pulls each of the girls aside individually to plead her case. Jessenia remains calm and calls out MJ as being on the forefront of the toxicity in the house (along with long-gone QueenVictoria). All the while, MJ is having a fit, throwing accusations at Jessenia, and is unable to keep her composure in front of Matt. He ultimately decides to see the truth and sends MJ home, giving the rose to Jessenia. Later in the day,Serena C. decides to pick a fight withKatie, accusing her of taking away precious time with Matt to start drama. Katie, being the grown-up she is, is not falling for this and leaves the room saying that Serena C. should take her issues up with Matt if it is a real problem for her.

On the first one-on-one date of the week, Matt takes Pieper to the dark woods for a “surprise” where it is revealed that he set up a mini-amusement park all for themselves. The two play carnival games, win stuffed animals, and take aggressive thrill rides. At the dinner afterwards, Pieper opens up about her tough-love household growing up and how she still struggles with expressing herself, and then tells him that she is falling in love with him.

On the group date, Matt takes nine girls to a bowling alley where they are split into teams and compete for an invite to the cocktail party afterwards. Team "Pink Petals", consisting ofMichelle, Chelsea, Jessenia, andSerena P., win the game, whereas Team “Blue Bombshells”, with Abigail,Rachael, Kit, Serena C., andBri, are sent home. The four losing women are distraught and express their disappointment to Matt. He clearly sympathizes, as later that night he sends them an invite to join the after-party in good competitive spirit.

On the last date of the week, Katie and Matt head to the spa to play a prank on “Bachelorette” alum and Matt’s best friend-slash-roommate,Tyler Cameron. Through hidden cameras and the masseuse’s secret earpiece, they ask her to give Tyler the most unexpected massage he has received. Later, they head to dinner where Katie opens up about her tendency to be a “fixer” in relationships yet how she is working on recognizing red flags more easily. However, Matt is just not feeling it and he states that their relationship has not progressed to the level of his other relationships. Unfortunately, he sends our favorite grown-up home.

We already know Tyler Cameron as Matt’s BFF and roommate, and the one who put Matt in the public eye enough for him to be chosen as the Bachelor. This episode, he drops by for a game of pool and to give some friendly advice for finding love on-camera, having been on the other side of that process already. Their interaction (on screen at least) is brief and generic.

In the real twist of the night, Heather Martin, a contestant on Season 23 of “The Bachelor”, shows up to the resort in a white minivan asking to see Chris Harrison. She explains that Matt and her mutual friend, ex-Bachelorette Hannah Brown, have been meaning to connect the two as they seem to be very compatible. Chris is (or acts) shocked by this news and needs to talk to the producers about this unique scenario. Later, it seems as though the producers were more than willing to stir up some drama, as she is shown to be quarantining at the resort before joining the house. Heather crashes the final cocktail party of the week, leaving the girls shocked and frustrated.

Stay tuned for next week’s episode to see what lies in store for Heather and the other girls!