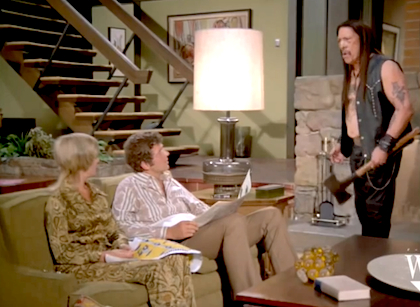 This may come as a shock to you, but Yours Truly, a film nerd that spends most of his free time writing for the internet, is not a huge football fan. But when Super Bowl Sunday came around and all of my friends wanted to hang out and watch the game, I eagerly agreed to join the festivities because I do so enjoy the commercials. Every year, we either get a sneak peak at some really cool upcoming films, something really funny/inappropriate, or something so incredibly pretentious that it will make you spit out your Milk Duds with glee. This year was no different, as a ton of fun, entertaining, and wildy expensive ads graced our television screens. For the sake of brevity and goodwill, I’ll skip all the various soda and car commercials, and reveal to you what I truly believe were the Top 5 Super Bowl ads:

I had no idea that this one was in the works, as I had luckily managed to avoid all of the teasers for the Super Bowl ads that were released online. I really wish they wouldn’t do that, by the way. Anyhoo, the quick cut from Mike and Carol Brady from "The Brady Bunch" to a pissed-off Danny Trejo decked out in full Desperado gear was a bit of a genius move, and if the commercial had ended right there, then it still would’ve been a great commercial. But it kept going, as did the laughs, and audiences were treated to even further hilarity when another cast member from Desperado (Steve Buscemi) makes an appearance towards the end. This was one of the best commercials of the evening, and they didn’t even need a sad puppy or deceased historical figure to pull it off.

Why? Because Liam Neeson, that’s why. I mean, the man trained Obi-Wan Kenobi and Batman, for god’s sake. He also got poisoned and shot by Seth MacFarlane, but we won’t hold that against him too much. I think, at this point,Neeson probably looks at his role from Taken as a bit of fun, seeing as how all its meaning and impact ended with the first film. It’s wonderful that he seems to recognize that his brooding anger is an absolutely hilarious thing when placed in a moment that is completely inappropriate. And I guess the game looks fun too.

I admire this commercial because it utilizes a slice of history, but doesn’t try to turn it into a sappy appeal to your morality in a way which ultimately has nothing to do with the product that the company is trying to sell. Although, at least the JFK speech had to do with the ocean. No, this commercial took one word from the product and instead created a silly little playlet in which the audience is able to recognize what is happening, and then is given information on the product in a way that is completely understandable and relevant to the little fantasy that they’ve constructed. Oh, and that part with the woman and the bayonet was simply marvelous.

The only thing more beautiful than a football flying through the air is a concept flying over the heads of all the youngsters who happened to be watching this Fiat commercial. I’m honestly not sure if I was supposed to be interested in the car or the pill by the end of the ad, but I still found it to be enjoyable. And I truly believe that the person who conceived of a car commercial featuring an Fellini-esque Italian couple who’s quest for love leads to a small car being enhanced by a magic blue pill that may or may not be from Pfizer is some kind of mad genius. I should also point out that I have absolutely no sympathy for the man in the commercial. When love is on the line, you do not simply close your eyes and leave things to chance. Well, at least somebody got a cool car out of it.

How could this commercial not make my Top 5 list? Similarly to Neeson, Bryan Cranston has taken his widely-recognized persona and has applied it to a situation that is completely inappropriate, which makes the ad all the more appealing. If you really stop to think about it, Cranston is giving us a Grade-A Walter White performance, but it’s the imbalance between his gravitas and the triviality of the situation that truly provides the comedy in question. That frozen, dead-eyed look that Cranston perfected on "Breaking Bad" has as he hands her the little pill bottle made me nearly choke on chips and dip. Esurance spent their money well when they secured the services of Mr. Cranston, and it was easily one of the best commercials of the evening.

Which ads were YOUR faves?