The 10 Most Badass Female Characters on Television Right Now! 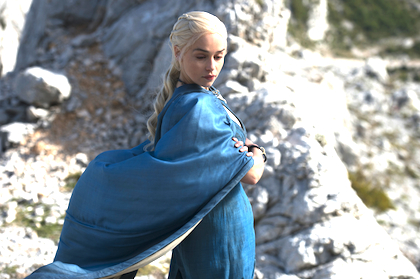 There’s no doubt that there has been a huge influx of wonderful women taking over television. It’s been a topic discussed by many in the entertainment industry, and entire panels on this topic have convened. Female producers, writers, and actresses have discussed the idea of “strong female characters”, and the responses have given us something to think about.

Recently, a Showtime panel came together to encourage us to think critically about this. Some saw the term “strong female character” to be a compliment but they also questioned it. They brought points about the definition of “strong” and the masculine connotation associated with the word, where suddenly calling a female strong makes her "manlier". Strong could be seen in a physical sense as well as an emotional sense, and even in just standing your ground, so why have we needed to emphasize strength in a specific category?

Characters from Murphy Brown to Buffy The Vampire Slayer have paved the way for the presence of leading female characters over all networks of television. So I would like to take the time to share some of my favorite leading ladies and how they have made their mark in television and why their character stands out against the previously portrayed view of women in television entertainment.

This intelligent woman embodies a go-getter ambition and strength that many do not expect. Her character is layered with complexity and it’s something that audiences love to see. She is confident and gets the job done!

She is a courageous and ruthless leader of warriors. She doesn’t back down to challenges and know what she wants, not stopping for anything and anyone to get what she rightfully deserves. She is cutthroat and just a straight up badass!

This woman see no bounds for her goals and ambitions. Although taking on a comedic tone in the series, her tenacity and dog-eat-dog mentality in politics is a refreshing trait that many don’t see in a female character. I bet she could give Frank Underwood a run for his money. Shout out to "House of Cards" fans!

Annalise Keating ("How to Get Away with Murder")

Viola Davis does a magnificent job of portraying Prof. Keating’s character. Annalise is cocky, intelligent, conniving, and very intimidating. Her character embodies strength and power while still being emotionally vulnerable. In the show, there is a scene where she takes off her makeup and calls out her husband was an emotional beat down. In this way, I like how she broke the stereotype of women always having to look good. It was gritty, raw, and real.

What I like about this show is how they are able to show different female characters each with their own set of skills and know-how to get what they want. Including:

In Alicia, we see a woman of growth and adaptation. She is ambitious, smart, and as many times as she has been knocked down, she still gets up to stand tall. Although sometimes she doubts herself, we can admire her will power. Get it? WILL power. Okay, sorry, still too soon. [*tears*] We will never forget you, Will Gardner. Even in her relationship with Will, we see her vigor and growth as a character.

She is the experienced and intelligent woman in power. In the show, we see her stand her ground and outsmart the partners at her firm, which shows why she is, in fact, a name partner. In the past season, we also see her transformation after losing Will. I also enjoy her relationship with Alicia and their dynamic. Diane is always there to help and support Alicia, which shatters the catty and ill-natured view of women and the “glass ceiling” in which women are always portrayed.

I wish I was as smart and good at my job as Kalinda is. She isn’t scared to break the rules to get the information she needs, and she is savvy in the art of manipulation. As adept as she is finding out others' secrets, she is just as good at keeping her own. She is cutthroat and rebellious, but her compassionate side can be seen in her relationship with Alicia and Cary. Her complexity and unpredictable nature made her a great character to watch. We are so sad that this is her last season on the show, but we’re hoping to see more into her character as she departs.

A quality that I admire about Leslie is her positivity and optimism. She believes in herself and her town regardless of what others say. Haters gonna hate. She is ambitious and empowering.

The zombie-killing, cutthroat, down-and-dirty badass that we all want as our apocalypse partner. She exemplifies physical strength and cunning as she travels the land inhabited by the dead. But it’s her emotional strength and loyalty that make her an admirable character. She’s the go-to female Daryl counterpart that everyone relies on.

Probably one of the most interesting and complex characters to hit television. What I enjoy about this character is that she doesn’t follow the trope of a leading character. While we question the things she says and the things she does, it’s those antagonistic qualities that make you wonder why you root for her. But nonetheless, her character is complex, unyielding, and makes her presence known.

Who are YOUR favorite female characters of television?