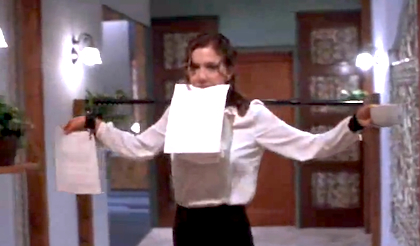 So, it’s only been a couple weeks since Fifty Shades of Grey came out in theatres, but I feel like it’s already been out for months with all of the promotions they’ve done…The hype is real. But I wonder if any of the crazy die-hard fans have seen Secretary, starring Maggie Gyllenhaal and James Spader. I ask this because the two have SO many similarities. I just came across this movie last night, and it’s definitely worth a watch, since you can’t help but compare the two. Here’s why you should sit down and stream this movie on Netflix... if you're into that sort of thing:

This 2002 film is about a shy brunette, Lee (Gyllenhaal), who falls in love with a Mr. Grey (Spader). Sound familiar? Mr. Grey controls Lee by telling her what to do, what to eat, and punishing her if she slips up. Lee becomes addicted to Mr. Grey and can’t seem to let go. First come the spankings, and then it slowly turns into more…

He’s an average-looking lawyer who looks to be in his 30s. He has a nice office, and his employees also look average. There are a few scenes in Secretary where he’s doing ab situps and running on a treadmill, so the dude is dedicated to his psychique. Seems logical, right? But in Fifty, Mr. Grey is a young bazillionaire with a perfect bod, piercing blue eyes, and a jawline that could cut glass. He has a sailing certificate, a pilot’s license, and yet he falls for awkward and dorky Ana Steele? Hmm. I mean, hey, kudos to the writer for making us all want this to actually happen in real life.

Maggie Gyllenhaal totally killed it playing this character. Lee has so many flaws, but we love her for them and she oozes with charisma. She’s fresh out of a mental institution (which always helps one's interest factor) and has relapses of cutting herself. It’s easy to sympathize with Lee; in contrast, Ana Steele just doesn’t have that same spark. I think Ana is forgettable, while you root for Lee from start to finish.

Who knows if Fifty will win any awards; don’t get me wrong, I’m not trying to hate on Fifty by any means… but I just don’t see it beating out other movies for any title. However, Secretary won the Independent Spirit Award for Best First Screenplay in 2003. Maggie Gyllenhaal won the Gotham Independent Film Award for Breakthrough Actor in 2002. I mean, maybe Jamie Dornan will win Best Abs at the People’s Choice Awards next year?

5. Fifty is all about fantasy

What it comes down to is that the Fifty books and movie are all for fantasy purposes. The story is meant to tap into your most primal desires. That’s what the movie industry is all about right? But there is a much higher sense of realism in Secretary; in fact, the events in this film probably happen more often in real life than we think.

Fifty fan or not, you should definitely watch Secretary right away. Here’s the trailer if you’re still not convinced: