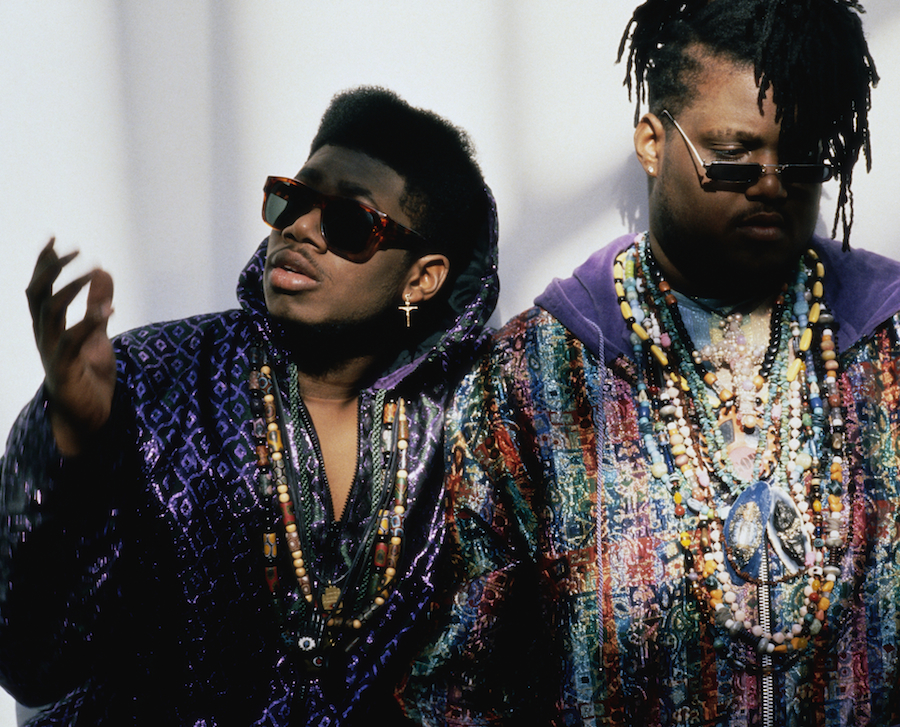 Many times in the history of popular music, truly remarkable artists have not been afforded mainstream longevity simply because they cannot be compartmentalized in a neat little genre package. P.M. Dawn is, in my humble opinion, one of those artists that have been shamefully overlooked.

How to even describe them? Well, that’s the point – you kinda can’t. I have personally seen P.M. Dawn CDs in almost every section of a music store – Pop, R&B, Rap, Hip-Hop, even New Age! I’ve often seen them lumped in with artists such as Enya and Enigma, but also Seal, Prince, Arrested Development, and Sade. That’s quite a wide spectrum of sounds and genres!

But that is what makes P.M. Dawn so special. Founded by brothers Attrell Cordes (AKA Prince Be) and Jarrett Cordes in the late-‘80s, they created a sound that you would be hard-pressed to compare or find an equivalent to. They released their first album, Of the Heart, of the Soul and of the Cross: The Utopian Experience, in 1991 and immediately made their presence felt as a hip-hop act that was thinking a little outside the box, with ethereal tracks like “Set Adrift on Memory Bliss” and “Paper Doll”. Both singles got tons of airplay, in part because their sound, replete with plenty of hip-hop beats and smooth R&B grooves, were still accessible enough for the mainstream.

Then, they released The Bliss Album…? in 1993, and their subtitle, (Vibrations of Love and Anger and the Ponderance of Life and Existence), showed that they were more than ready to take things to a different, more elevated level. They managed to break into radio success with their slow jams “Looking Through Patient Eyes” and “I’d Die Without You” (the former of which heavily sampled George Michael’s “Father Figure”), and the rest of the album seemed to indicate that they were ready to move on from their rap/hip-hop roots.

By the time they came out with Jesus Wept in 1995, they had carved a space for themselves out of the mainstream but into a higher consciousness, with their dreamy melodies and cerebral lyrics. Their biggest success from that album (“Downtown Venus”) peaked at #48 on the charts. Not bad, but nowhere near the success experienced by their previous singles. Their fourth album, 1998’s Dearest Christian, I’m So Very Sorry For Bringing You Here. Love, Dad, fared even worse.

The group faced a series of setbacks after that. Prince Be, a diabetic, suffered a massive stroke in 2005. Soon after, his brother Jarrett decided to part ways with P.M. Dawn, and he was replaced by a cousin of theirs, Doc G. In 2009, Prince Be had another stroke and had to have his right leg partially amputated, and Doc G took up the P.M. Dawn reigns and continues to tour and perform their hits, though with a decidedly more traditional hip-hop sound.

Unfortunately, two years ago this month, Prince Be succumbed to his various health problems for good, and with him the days of deep, reflective musical art are over.

Happily, though, we still have four amazingly brilliant albums to revisit again and again. And this week, I’m featuring the best videos from a group that doesn’t get nearly enough credit, plus some lesser-known tunes that the uninitiated should definitely check out! R.I.P., Prince Be. Your talent and voice are deeply missed.

“Set Adrift on Memory Bliss” -- Probably their most well-known hit, featuring a sample of Spandau Ballet's "True". I've seen this song featured in many movies, including 2007's I Now Pronounce You Chuck and Larry, and the Backstreet Boys covered it in 1996. It remains the band's only #1 hit.

“I’d Die Without You” -- This was part of the soundtrack for the 1992 Eddie Murphy-Halle Berry flick, Boomerang.

“More Than Likely” -- Another slow jam, but this one features a duet with Boy George! This is a different version than the simpler one on the album, but it's no less powerful and lovely.

Here are some other songs that you should still give a listen to!

“She Dreams Persistent Maybes” -- It's hard to pick my favorite P.M. Dawn song, but I always seem to come back to this one. Popified soul gets an infectious guitar riff accompanied by Prince Be's melancholy and hypnotic vocals.

“Downtown Venus” -- The funky beat from this peppy little gem will get your head a-nodding. Who cares if the lyrics make no sense?

“The 9:45 Wake-Up Dream” -- A cosmic journey through another state of consciousness. Shades of Pink Floyd.

“So On and So On” -- A whole lot going on here, between its snappy beat and matching lyrics, but every bit of it is awesome.

“I’ll Be Waiting for You” -- A perfect song to listen to while driving down the PCH around sunset with the windows or top down. Blissful, serene, purely P.M. Dawn.