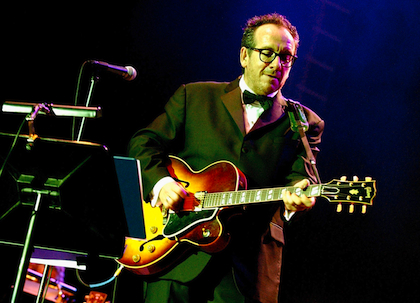 Even though you’d probably never guess it from his music today, Elvis Costello has a very good reputation and reverence from the pub rock/new wave music scene. Indeed, that is where he got his start, back in the ‘70s when British rock was spawning acts like the Sex Pistols and The Clash. In fact, punk rockers still consider Costello one of their own, even in spite of his tailored suits, hipster glasses, and folksy tunes.

Then again, it’s easy to appeal to a wide range of music lovers when you have released THIRTY studio albums in 36 years! Including multiple albums in one year alone! There is surely no shortage of material from the London-born rocker, born Declan Patrick MacManus, nor is there is a shortage of willing ears to listen to it. But even for his longevity, massive catalogue, and name recognition, he’s barely ever made a blip on U.S. charts. He’s never charted lower than 19 on the Hot 100, and the only two #1 songs he’s ever had were on the Modern Rock charts. He does a bit better over in his native Britain, but even there, he’s only found himself in the single digits 3 times, the most recent of which was in 1981!

It’s a baffling phenomenon, but it’s probably precisely where he wants to be. No pressures of being a “rock star” – just consistently being able to do what he loves, do it well, and nevermind the bullocks (see what I did there?). Of all the artists signed to a major label, he’s probably enjoyed the most creative freedom. He’s just a consummate, reliable artist that any music fan, no matter what your predilections, can enjoy.

For me, my favorite Elvis Costello jam is precisely the one that charted highest in the U.S., 1989’s “Veronica”. It’s a great folk tune whose upbeat vibe distracts you from the fact that it’s about an elderly woman with dementia recalling bits and pieces of her sordid past. Thankfully, the music video makes this a lot clearer – it’s basically The Notebook before Nicholas Sparks was barely a glint in his publisher’s eye. I remember watching this video when I was a kid whenever it would come on and being transfixed. Something about the weight of what’s behind that old lady’s eyes (which we see in flashbacks) contrasting with the serenity of her face and Elvis’s searching vocals. It says so much in just 3-and-a-half minutes.

Check out the video below: