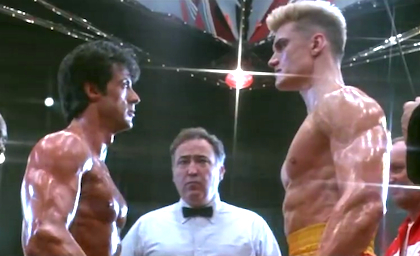 A couple months ago, I had the pleasure of visiting some dear friends of mine who live on the East Coast, one of whom lives in Philadelphia. When my friend Rose and I discussed what we wanted to do in Philly, we both immediately agreed that we had to run up the steps of the Philadelphia Art Museum and pretend to be Rocky. Being the lazy sloths that we are, though, we sauntered up the steps and watched all the other Rocky fans huff and puff up and leap around in joy when they reached the top. As I watched them jump up in triumph (including one fan who decided to reenact one of Rocky’s fights entirely on his own), I realized how much of a cultural phenomenon that Rocky has become. There are six Rocky movies in total (and a seventh one on the way!), and it’s nearly impossible to think of boxing without thinking of Sylvester Stallone, the iconic star, writer, and director of the Rocky films.

To kick off this year's Summer Movie Guilty Pleasures series, I decided to delve deep into the Rocky mythology and watch Rocky IV, which has long been rumored to be the most insane of the series. To my utter delight, these rumors turned out to be true, as Rocky IV is one of the craziest (and therefore wonderful) films I have ever seen. Set directly after the aftermath of Rocky III (in which Rocky takes on Mr. T), Rocky IV begins with Rocky spending some time with his family and his best bud, Apollo Creed (who, from this point on, will be referred to as Carl Weathers). Rocky decides to give his Uncle Pauly a birthday party -- a party which his uncle does not seem too happy about since he is wearing the most pathetic birthday hat ever. To liven things up, Rocky gives his uncle the gift all old Philadelphian men dream of having: a robot. The robot, which talks, cleans, has a phone, and plays music, looks as though a particularly hideous fly mated with a metal trashcan, and this was the result. To complete the look, the robot comes out wearing a tiny birthday sombrero on its head (it’s a stylish robot). There is no reason whatsoever for the robot to be in the film, and what makes it even better is the fact that Uncle Pauly falls in love with the robot. He changes the robot’s voice to that of a seductive woman and has the robot perform “wifely” duties for him, such as bringing him beer. He even begins to call the robot pet names such as “baby” and “honey”. Poor Uncle Pauly is so lonely that he has to resort to having a robot for a wife. I think the better gift would have been trying to set Uncle Pauly up on a date, but apparently that’s too much for Rocky -- a sexy trashcan fembot is way better.

And this robot is not just in one scene -- it (I suppose it would be she?) appears throughout the whole film! The family even goes as far as to leave their 8-year-old son and his friends in the care of the robot on Christmas day. The robot appropriately gets into the spirit by dressing up in a Santa suit that resembles a leftover costume from Bad Santa, and even helps the boys to cheer Rocky on. I love that, for no reason whatsoever, there is a sexy trashcan fembot who wanders in the room to serve beer and eggnog. Oh the '80s!

As for the plot of the film: Rocky and Carl Weathers learn via television located right next to Carl Weathers's pool (come on, that can’t be safe) that there is a new Russian boxer (or, in accordance with the time period of the film, a boxer from the Soviet Union) who wants to take on both Carl Weathers and Rocky. Named Drago, the boxer looks exactly like his wife -- both have cropped blonde hair, are built like the Hulk, and remind me of Suze Orman. I couldn’t tell if Drago is also a robot, or possibly related to Khal Drogo from "Game of Thrones", as he barely spoke throughout the film and seemed to only want to punch people. Carl Weathers is more than willing to take on Soviet Khal Drogo, but Rocky is a bit more hesitant; he reminds him that they are turning “into, like, average people.” Carl Weathers decides that he is no mere mortal, thank you very much, and that he will take on Soviet Khal Drogo in Las Vegas.

The film then morphs into a wild Vegas musical. Carl Weathers emerges on a giant gold bull serving us some sparkly Uncle Sam realness. He dances around the stage--sorry, boxing ring where Vegas showgirls, flying airplanes, and none other than Mr. James Brown are performing. Soviet Khal Drogo stares in disbelief, wondering what these crazy Americans are on, and why there is a musical number that lasts a good five minutes in the middle of a boxing movie. He takes out his anger about this (Soviet Khal Drogo is not a James Brown fan) by -- SPOILER ALERT -- killing Carl Weathers!

Naturally, Rocky is upset by this, and decides to mourn Carl Weathers by reliving a good 15 minutes of footage from previous Rocky films. I personally love the footage of Rocky and Carl Weathers running on the beach à la “Baywatch” style, which apparently takes up a great deal of Rocky III (so I guess I need to watch Rocky III). Once his mourning montage is finished, Rocky decides to fly to the Soviet Union in the cargo hold of a decrepit plane to take on Sovier Khal Drogo. The film then follows his training, which is hilarious. Rocky decides to relocate to the creepiest cabin in the woods ever captured on film, where he proceeds to use “the wilderness” as his training ground. The greatest training scene involves Rocky attempting to become Balto as he pulls his Uncle Pauly in a sled while yelling “Mush!” The training montage proceeds to last for another 15 minutes, after which Rocky defeats Soviet Khal Drogo.

Rocky IV proves just how strange the Rocky movies become as they go through the series. The upcoming film will probably not be this crazy (it looks pretty grounded in reality), so if you are looking for an insane Rocky movie with your friends, this is the one to check out.