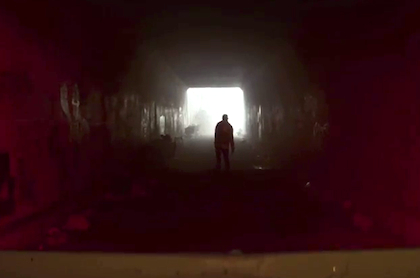 As we've reported to you before, the upcoming “The Walking Dead” spinoff called “Fear The Walking Dead” will take place in our sleepy little town of Los Angeles rather than the deep south. “The Walking Dead” creator Robert Kirkman recently admitted that the show will cover the very beginning of the outbreak, so the zombies will look more human, like in Night of the Living Dead instead of the more traditional walking, rotting corpses we have come to know and love on "TWD".

This sounds pretty, pretty, pretty good. But the show is scaring me already. If the zombie outbreak does start in Los Angeles, I am definitely screwed! According to a fun yet horrific zombie survival statistical map found on this website, California is the 39th state out 51 (counting Washington D.C.) on the likelihood of surviving a zombie apocalypse. My home state of New Jersey is 51st. Considering that everybody lives on top of each other in Los Angeles, though, I think that the survival rate is dropped down specifically for this city. Good news for folks in Alaska -- you’re the most likely to survive! And the cold weather will keep your zombies looking fantastic!

All zombie survival stats aside, I’m excited to see what exactly these game-changing zombies will look like. Who knows, maybe we’ll also get an explanation as to why this outbreak happens in “The Walking Dead” universe to begin with. So far, no pictures of the new zombies have been released, but there is a trailer for you to check out:

Judging by what they say in here, those of you who fear getting flu shots may not want to tune in. No release date for “Fear The Walking Dead” has been announced but it’s said to start this summer with the guarantee of there being a second season. Happy zombie prepping!