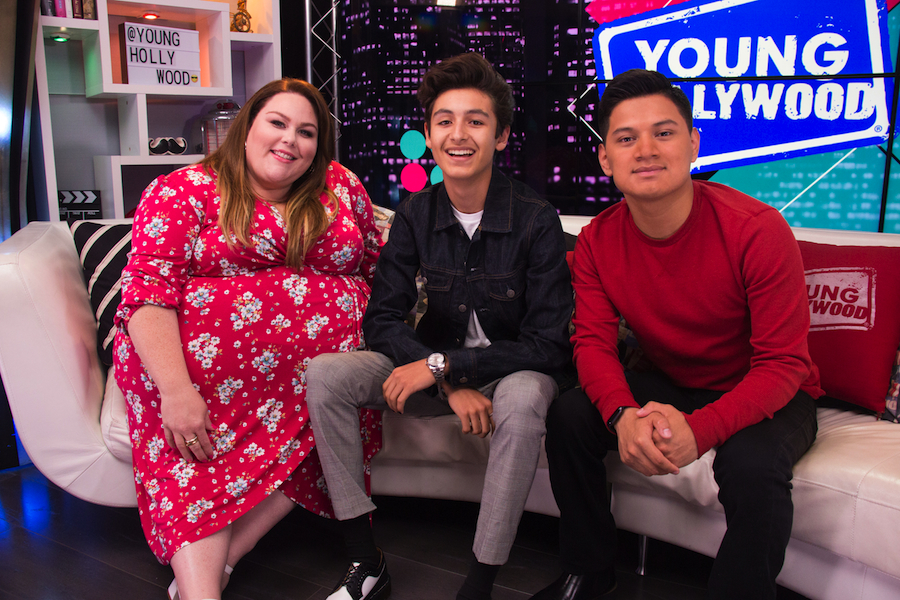 We had a very special group of people in the Young Hollywood Studio to talk about a powerful movie that is hitting theaters. It is one thing to have cast members of a movie come in, but it’s another to have them sitting alongside the real-life person whose story the movie was inspired by. Young Hollywood welcomed Chrissy Metz, Marcel Ruiz, and John Smith, and OMG can they come every day?  While in the studio, the trio discussed everything from the emotions they felt during the filming of their new movie, Breakthrough, all the way to who Chrissy’s favorite rapper is… any guesses?

First and foremost, we have to talk about Breakthrough. Don’t believe in miracles? Wait until you see this movie, which is based on the true story of John’s experience being on the brink of death. When he was just 14 years old, he fell through an ice-covered lake and was trapped for over 15 minutes. While in the hospital, John’s condition seemed hopeless, as he didn’t have a heartbeat for 45 whole minutes. John’s mother came to the hospital and immediately began praying out loud. Despite the number of minutes that had passed without any signs of life, it was only seconds after his mother’s prayers that John’s heart began beating. Not only did the teen beat the odds, but he continued to wow those around him with his speedy recovery. This is an incredible story, and we got to hear from John firsthand about what it was like seeing Chrissy play his mother and Marcel play himself in the movie.

John told YH that he lost it the first time he saw Chrissy cry in the role. Imagine all of those emotions that appear after watching your own near-death experience being played out by two amazing actors. He also talked about just how powerful a mother’s love really is. The best part about this interview? In my opinion, it was the very strong bond these three have formed, one that John calls “a relationship built for the long-run.”

Speaking of strong bonds, Chrissy and Marcel have such a great brother/sister-like connection, which was so fun to watch! When it came to their outlooks on the movie, Chrissy said that the most important thing to her was that John and his family were happy. She mentioned that she and Marcel may be acting, but this is someone’s real life they are portraying. Chrissy’s hardest scene was what can be argued as the most powerful scene of the movie – the part when she is praying over Marcel. For Marcel, it was reenacting the lake scene. In this scene, he could really understand the suffering and struggling that John went through. Like every normal parent-and-child relationship, there can be some arguing here and there, and Marcel jokes that it was hard to be mean to Chrissy. I don’t blame him, she is a ray of sunshine, even more so in person!

For our "This is Us" fans out there, you would know that Chrissy’s character Kate has a love for singing and even dressed up as Adele and performed at random venues. But her voice doesn’t stop at Kate. Nope. In fact, Chrissy performed a song on the Breakthrough soundtrack called "I’m Standing With You". I’m not crying, you’re crying (okay, I am too).

Even though we were fangirling over our amazing guests, they definitely have their fangirl moments too. Marcel told us that Chrissy loves Post Malone and the actress reaffirmed that when she gave the camera a super mischievous look. Love her. Marcel has his moments too, because the guests shared that he freaked out when he learned NBA star Steph Curry was an executive producer on the movie… can you blame him?! We love these two for always keeping it so real.

Having John, Chrissy, and Marcel in to talk about Breakthrough was such a pleasure. This trio is a true combination of strength, talent, and, now, friendship. Breakthrough is in theatres NOW!