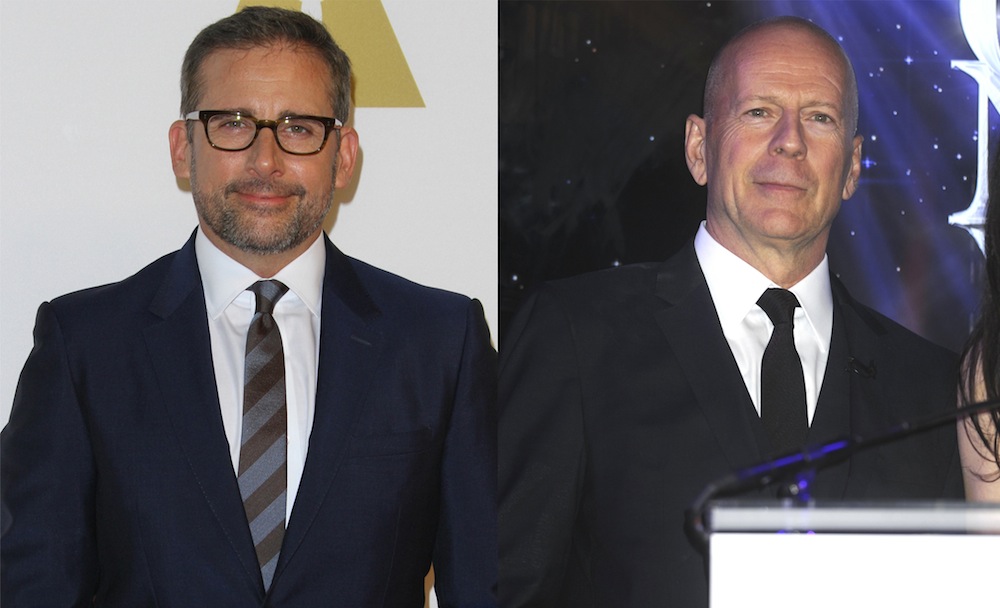 Woody Allen, as is his habit, is getting ready to release a movie that’s starring half of Hollywood. As from the cast, everything else about the film, including its plot and even its title, has been kept under wraps -- though we did hear recently it is a period piece. It’s anybody’s guess which time period, though. So far, cast has included names like Jesse Eisenberg, Kristen Stewart, Parker Posey, Blake Lively, and, until recently, Bruce Willis. It is reported that Willis left production due to “scheduling” conflicts, so when action star and all-around man’s man Bruce Willis leaves your movie, what’s a Woody Allen to do? Replace him with funnyman Steve Carell, naturally!

Yeah… I’m with you. It doesn’t quite jive, and yet that’s not to say one is better than the other. I like them both a lot. The thing is they are apples and oranges. They have nothing in common as actors…

... or do they? You don’t have to answer that question, because I’ve tasked myself with doing it for you! Here are 4 things Bruce Willis and Steve Carell have in common that Woody Allen might have taken into consideration for his new movie:

They both were jerks to kids (in movies)

I should clarify that, although I don’t know much of Willis or Carell’s personal lives -- they look like fine fathers. These are two movie roles where they were absolute jerks to kids. In the film The Way Way Back, Carell played a jerk of a stepfather. I mean, the movie starts out with Carell telling his stepson that, on a scale from 1 to 10, he’s a 3. Ouch. Then there’s Willis in the movie The Kid where he is a jerk to the titular kid. The twist in this movie is that the kid is Willis from the past trying to teach him a lesson in not being such a jerk. Also, it is debatable if Willis is a jerk to the kid in The Sixth Sense. C’mon, Willis had to know he was dead the whole time and tormenting the kid, thus being a jerk to another kid!

Both have played spies

Willis played a spy in the Red movies. Contrary to popular belief, he is and always has been a cop in the Die Hard series... Just a really [email protected]$$ one. So, Carell is actually ahead of Willis in the spy department. Carell has played two spies. First time was in the film adaptation of Get Smart and then later in the Despicable Me franchise! Way to go, Carell! Who would’ve thought you were more of a spy than Bruce Willis?

Carell recently turned in an Oscar-nominated performance in Foxcatcher as the wrestling-crazed billionaire John Du Pont, the heir to the DuPont chemical company. Believe it or not, there was a time before Willis decided to come to L.A. where he was just working odd jobs. One of those jobs was in Deepwater, New Jersey, where he transported work crews to the DuPont factory there. This would’ve been extra creepy if it happened during the actual events of Foxcatcher, but alas, Willis worked for them in the late-'70s.

We all know the twist of The Sixth Sense. It’s been spoiled in many other movies and TV shows (and even in this very article), but Willis is dead the whole time and thus a jerk to the kid in the film. Get over it! What you may not have known or remembered is that Carell plays what appears to be a ghost in the film adaptation of the '60s TV show Bewitched, although he might be a hallucination, but let’s just go with him being a ghost. Carell comes into the movie at a pivotal point as the ghost of television character Uncle Arthur, here to help Will Ferrell’s character find true love, and give him a ride… but he still acts like a jerk to Ferrell.

So there you have it, folks. Replacing Bruce Willis when he has scheduling conflicts with Steve Carell is pretty much like Willis never left. I mean, the hard evidence posted above just proves that they are basically the same person. So, whenever this top-secret Woody Allen movie comes out, you may even ask yourself in the theater, “Hey, is that Bruce Willis or Steve Carell?”