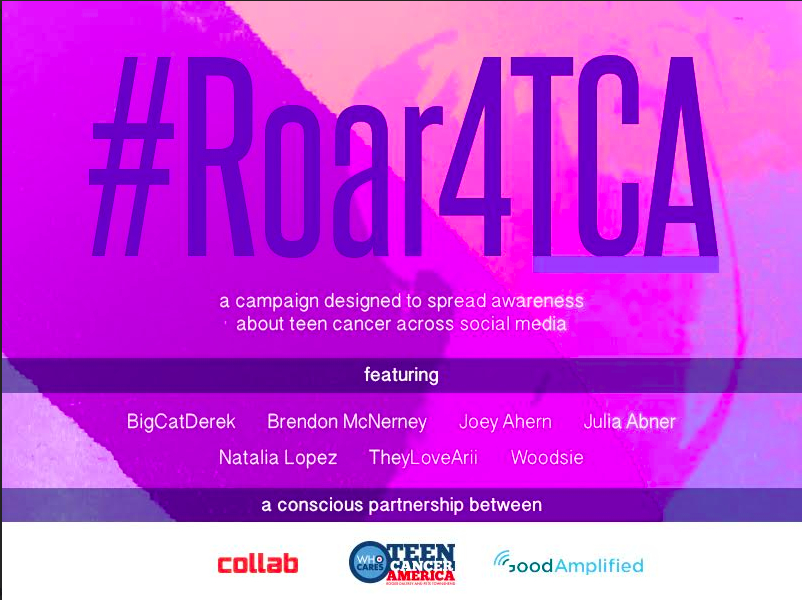 We are currently living in a digital era which is allowing us to shed more light on some important topics. Social media influencers are crucial in this day in age and bring so much happiness to people on a daily basis around the world. With many web stars accumulating millions of followers, they now have the ability to bring awareness to important issues and use their platform for good.

Social media stars Julia Abner, BigCatDerek, Woodsie, Natalia Lopez, Brendon McNerney, and TheyLoveArii are coming together to support Teen Cancer America (TCA). It will be the first multiplatform social media campaign for TCA in hopes to bring awareness across Facebook, Instagram, Vine, and Twitter. TCA was actually created by Roger Daltrey, whom you may know from a little band called The Who. Amplified CEO, Amber J. Lawson, says, "Our mission at Good Amplified is to help our network partners like Teen Cancer America leverage storytelling and YouTube to reach their next generation of donors, volunteers, and advocates. A key piece is partnering with other networks like Collab and all their passionate creators to create compelling content for causes they care about!"

What’s so great about this campaign is that it really is cutting across every major platform in a new way. TheyLoveArii (AKA Ariana Renee) has an impressive 1.2 million followers on Twitter and over 300,000 on YouTube, so her platform alone can reach a million people with a single post on her Twitter. This is a great way to help bring awareness. She used her Instagram account to spread awareness using Katy Perry’s “Roar”-- quite fitting if you ask me.

Vine star Julia Abner said, "Being a part of a charity is more than just a donation or a share or a post; it is about spreading awareness to the people around you and to the people around them and so on. If I'm going to share something with my supporters, I am going to do so in the best way possible. Spreading love and kindness shouldn't be a task, it should just be.”

You may be wondering, how is this campaign is going to work? Well, it’s simple-- each influencer will be placed in front of a backdrop of white, blue, or red (the TCA colors) while delivering an important message to their fans in their own way.

Woodsie and Natalia released their videos and gave great information on the campaign and how you can get involved. Check it out!

Collab Director of Communications, Tiffany Au, said, "From the get-go, we knew that there's a special opportunity for our digital creators to do social good with their influence. With #Roar4TCA, our team matched creators across multi-platforms, suggested creative content unique to their talents, and identified audiences that would resonate with our message. #Roar4TCA is part of a larger discussion begging the question: How can we develop opportunities that inspire our creator-advocates and their supporters to ignite change?”

The influencers combined following equals over 1.5 million, and BigCatDerek was even nominated for a Streamy Award this past year. He said, “I participated in #ROAR4TCA because one of my best friends lost a battle to cancer when we were both 15 years old. I've seen firsthand how families and communities are affected when a young person gets cancer, and it's pretty devastating. When I was asked to help spread the word for an organization that works to prevent that sort of suffering, I was all for it!” As many of you know, he loves big cats. He even used Araali, a lion, who is in teenage years, to promote his message.

This is an example of a great group of people working together to make a difference in a variety of different ways. The power of the Internet allows this message to reach a greater amount of people and all of these influencers are making that a reality.

Don’t forget to hashtag #ROAR4TCA and check out their official website for more information on how you can help!