A Beginner's Guide to Musicals 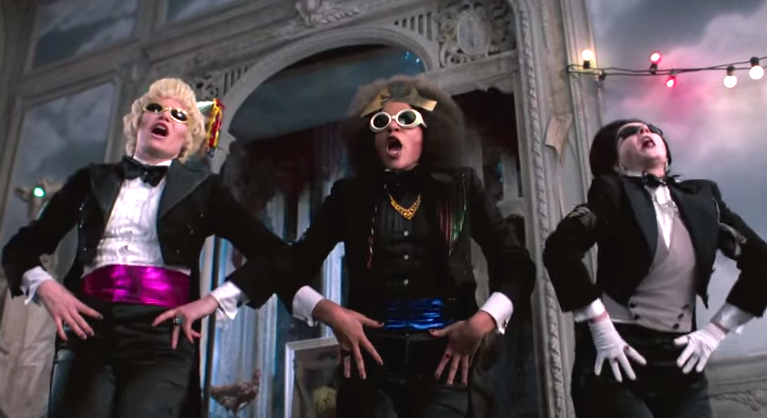 Confession: I, Kevin Tyberius Fullam Donaldson, am not a fan of musicals. On paper, a musical is pretty much a basic storyline where characters spontaneously break out into song and dance, while every body around them observes like this is a normal thing that happens in the real world, and in some cases even join in what would be a completely bizarre spectacle in our world. I know I may sound harsh, as something I love like Star Wars could never happen (I can still dream I am a Jedi), but there is just something with musicals that has never clicked with me, and I know I’m not alone.

In the past few months, I’ve entered into a pretty serious relationship with a girl who claims that coffee, baked goods, middle of the day naps, and, of course, musicals are, as she puts it, “to die for”. As a service to others and myself, I have decided to make a guide to musicals for non-musical fans a try, so let’s jump into this.

As stated above, from the outside, musicals sound ridiculously bizarre. If we really want to treat the world of musicals as something real, there are still some glaring questions like: What possesses these people to sing? How are they perfectly choreographed and naturally born with the skills to pull off these dance moves? Why is this considered the norm in all of their worlds? Does this mean they’re all psychically connected? As a fan of a lot of art house films and directors who suspend reality and push things to extremes, like in the works of Werner Herzog, Harmony Korine, Mel Brooks, Monty Python (comedy films are art too!), and even the movieThe Jerk (seriously, it’s art to me), things just happen and exist for no reason really. The best way to enjoy their films is to not question anything. Sometimes things just happen in movies because it looks cool or is funny. It doesn’t need to make sense, and I personally give these guys passes because of that.

That previous rant was for a reason, because I’m going to ask that you do the exact opposite with musicals: question everything! When you hyperextend this questioning, it actually makes the whole set-up even more Christopher “Ludacris” Bridges. When you really think about it, don’t you wantThe Sound of Music (which took me an embarrassingly long time to figure out was about Nazis and WWII… more on that later) and Rent (even I could tell this was about full-blown AIDS) to take place in the same universe? I mean, what if the happy singing family being chased by Nazis in The Sound of Musicstarted a TarantinoDjango Unchaineddomino effect in this musical universe that resulted in song and dance for any occasion, especially on darker occasions like when AIDS is on the prowl in Rent? It’s like this tradition went viral long ago in this universe and has consumed all culture. (You’re welcome for this insane thought.)

With all that said, let’s get to some musicals every non-musical fan can find at least one of they could like, and to make it even better, you won’t have to go to the theater for this.

The works ofTrey Parker and Matt Stone – Parker and Stone may be best known for creating the foul-mouthed and deranged satirical adult cartoon “South Park”, but the duo are admitted fans of musicals. It really shows in their works, and it’s hard to pick just one thing to check out, and even after I mention a couple, you may be skeptical if they are musicals or not, even though you may have seen them, but let’s go...

First off, the most obvious one that’s a musical but you may not have seen isCannibal! The Musical. This actually started out as a student film for Parker and really didn’t help them gain success, but for fans of Parker and Stone, it’s something to behold. The musical follows the true story (with facts changed and song and dance inserted for musical effect) of Alfred Packer, a prospector who led a team of other prospectors through the Colorado Rockies. During this trip, Packer was suspected to have killed and eaten his mining team. Parker decides to put a musical twist on this dark NSFW tale (Parker also has somewhat of a breakdown over a college girlfriend who cheated on him throughout the commentary). You can watch the whole thing below, but again it's NSFW!

Second up isTeam America: World Police. I know, I know, you’ve seen this and isn’t a musical. That’s precisely where you’re wrong, Internet reader. Just like its puppet protagonists, this movie is going undercover… undercover as a musical. Sure, there may not be that many songs in this non-JimHenson certified chaos of puppetry, but Parker and Stone slip just enough to satisfy their musical needs while not bothering audiences that may not be into that. Also, there is a blatant parody of Rent (NSFW):

Lastly,South Park: Bigger, Longer and Uncut is a straight-up musical. Unlike Team America, this one is right there and in your face about it. They really don’t try to hide it, but a lot of their fanbase may not be into musicals as much as them, but I can tell you that my 9-year-old self, along with my friends, didn’t care. We really had no clue this movie was a musical, even though they are constantly singing throughout it and even got nominated by the Oscars for “Blame Canada” (again, NSFW):

Rocky Horror Picture Show -- Even for a musical, this plot is strange. It follows the sexual, horror-themed adventure of a newly-engaged virgin couple as their car breaks down in front of a spooky mansion, Scooby-doo style. There they meet the transsexual Dr. Frank-N-Furter (played by Tim Curry), who is the middle of creating his ultimate dream man. This one you may want to go to one of the regular midnight showings as people will re-enact scenes on stage, as well provide goody-bags of different items like toast for the audience to throw at the screen and each other. Just a warning that if you see it that way, you won’t really know what the hell is going on, but it’ll still be fun, and musically it’s more on the rock side rather your traditionl showtunes.

Pretty much any Muppet movie ever – Seriously. It’s hard for me to even think of one that isn’t a musical. We can pretty much universally agree that The Muppets are where it’s at (even though my stepdad believes they are immortal vampiric creatures cursed to constantly have the same personal issues over and over again). Perhaps it is not evident on the new TV show, but their movies are packed full of singing and puppet choreographed dance numbers. In 2011, with The Muppets they even won an Oscar for best original song for “Man or Muppet” written by Flight of the Conchords's very own Bret McKenzie:

Across the Universe – Finally, and quite most controversial on this list, is The Beatles new century musical movie. Do I have any idea what the plot of this movie is? None whatsoever. Do I care? Not at all. It’s cool and trippy-looking, and 95% of the time I’ve found it’s a safe bet that a girl you’re seeing at the time is into it. Basically this movie appropriates Beatles songs as musical numbers that loosely work into a pretty vague plot, considering I have no idea what’s going on. (I refuse to Google it because, if it’s not clear to me, then I do not trust a Wikipedia guide.) But trust me, most people don’t need a plot to dig this, but I respect you if you don’t like the appropriating of Beatles music. Below is the intro:

That’s it for this comprehensive guide to musicals for non-musical fans. Remember, what I’ve listed above are only good starting points into musical. If you want more suggestions, I will be happy to make an upper-tier section for movies as diving into unintentionally funny classics like The Music Man and West Side Story. If you guys really dig that (and I start getting bigger paychecks), then maybe I will do a theater guide for us as well. I hearBook of Mormon is supposed to be quite good...