Season 2 of "What We Do In The Shadows" Proves It's One of TV's Funniest Shows Right Now! 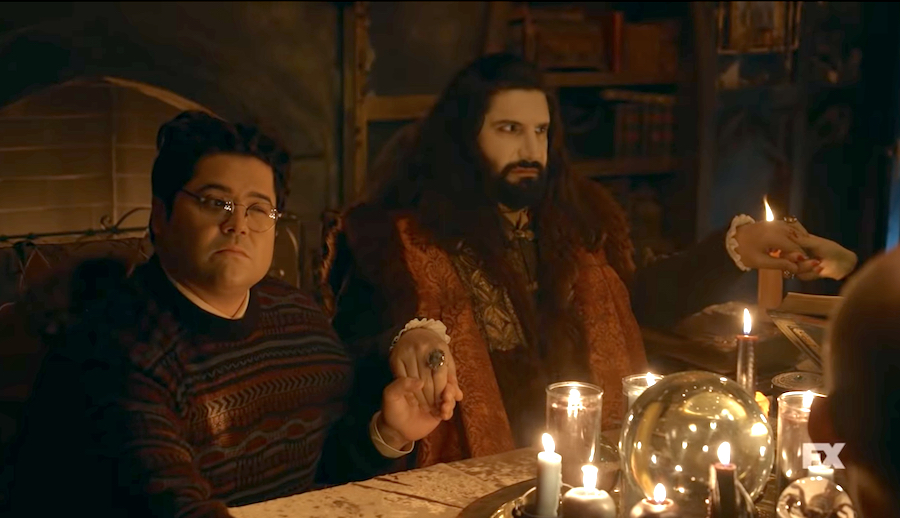 Another season of "What We Do In the Shadows" has come and unfortunately gone and the results are in: the show’s still got it. "What We Do In the Shadows" is continuing the proud tradition of TV mockumentaries being equal parts ridiculous and hilarious. The show answers the age old question we all are kept up at night wondering: What do vampires do in their downtime? "What We Do in the Shadows", based on a cult classic feature length mockumentary of the same name, follows four vampire roommates and their familiar (what’s a familiar? see below) as they go through daily (well, technically, nightly) life.

The show is made by a group of comedy all stars -- Taika Waititi, who is best known for his Oscar-winning filmJojo Rabbit as well as Thor: Rangarok, is a writer and executive producer. Actor Matt Berrycame to fame in the impossibly hilarious British comedy "IT Crowd". Now he stars in WWDITS as refined-because-he’s-British vampire Laszlo. Two cast members from the mother of all mockumentary series, "The Office", made appearances  this season: Mark Proksch, who played a Dunder-Mifflin warehouse worker in Season 8 of "The Office", is a series regular on WWDITS playing an energy-sucking vampire (the most common form of vampire, who will quite literally bore you to death) named Colin Robinson. The incomparable Craig Robinson, who played Daryl on The Office, appeared as Claude, a vampire hunter, this season.

What Happened This Season?

A lot. Colin Robinson got promoted at his job so he has all the power to bore any employee he wants but then eventually bores himself to death with all his power. Laszlo took up a new identity as a bartender and a high school volleyball enthusiast in a small town to avoid paying an old debt to another vampire (played by Mark Hamill). And Nadja (Natasia Demetriou) encountered the ghost of herself, who later inhabits a creepy doll. Needless to say, it was an action-packed season.

Familiar getting tired of the familiar.

Perhaps the best ongoing storyline throughout the newest set of episodes was Guillermo’s (Harvey Guillén) growing impatience with the vampires. Guillermo is a familiar, which, in the context of the show, means he’s a human vampire assistant. Nandor (Kayvan Novak), the primary vampire he works for, promised him he’d turn him into a vampire at a… non-specific time. Guillermo has been working for Nandor for 10 years and still does not have his own pair of fangs. This led Guillermo to this season in which we finally saw him starting to rebel. He tried quitting and working for a hippie vampire who believes her familiars should be bitten and transformed into vampires within three months. Only, the hippie vampire was just a familiar herself wearing a set of Party City fangs just to trick people. So then Guillermo just straight up abandoned his master and left a note just reading “Sorry.” In that episode, we got a sense of why Nandor refuses to bite Guillermo any time soon: Nandor and his housemates need Guillermo to function as a “normal” vampire household. Without Guillermo, there’s no one to lure new human victims, bodies are littered all over the floor, and there’s no one to pick up the laundry!

If I had to pick the funniest episode of this season, it would probably episode 5, “Colin’s Promotion”. Colin Robinson, the energy sucking vampire, got a promotion and became an all-powerful vampire. Colin has always been a third wheel in the vampire house, being even lower on the totem pole than Guillermo, who’s not even a vampire. The shift in power dynamic was a brilliant change of pace. Throughout the course of the episode, the rest of the household questioned if they’ve been too mean to Colin Robinson as he exacts his revenge. Of course, all good(?) things must come to an end, and Colin’s reign ended when he eventually bored everyone, including himself, to death. But it was… interesting while it lasted.

Lucky for us, the show has been picked up for a 3rd season, so keep an eye out for that. In the meantime, you can catch up with both current seasons of "What We Do In The Shadows" on Hulu, and be sure to check out Young Hollywood's Zoom chat with Nandor and Guillermo themselves, Kayvan Novak and Harvey Guillén, below!