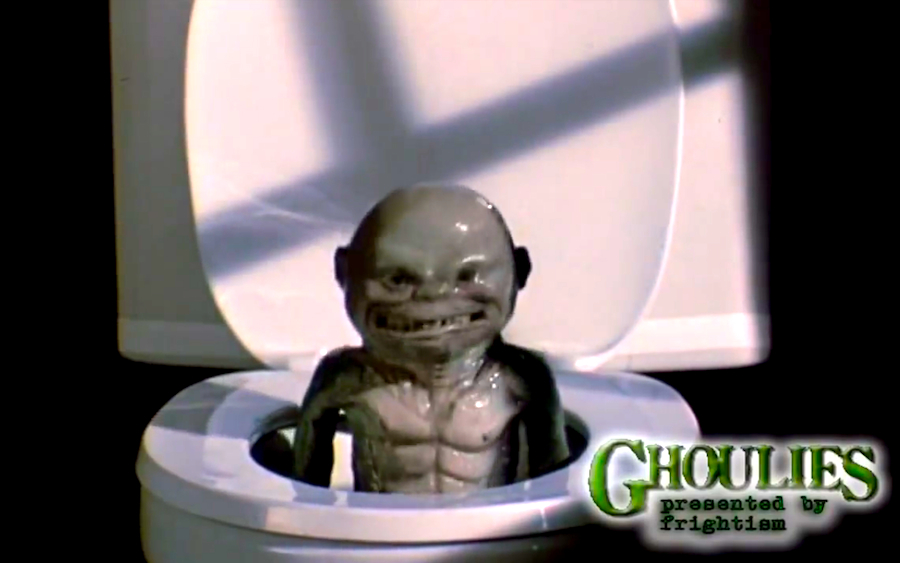 Ghoulies, a rip-off of the 1980s classic, Gremlins, is a 1980s camp fest (it is oh-so '80s, down to the dialogue and big hair) primarily known not for any particular scenes, but for this poster. My computer screamed when I opened this picture!

The infamous poster became notorious for convincing children that, should they go to the restroom, a green aborted child of Kermit the Frog would leap out and attack them. Rightfully so, parents were angry, and wrote a number of complaint letters to the studio. Thus how most people remember Ghoulies as the film that turned toilets into objects of sheer terror.

As a film, Ghoulies is spectacularly terrible -- and therefore all the more delightful. The film opens with a mysterious group of people dressed in robes holding a Satanic ritual. Led by "David Lee Goth", they attempt to murder a baby (yep, they try to sacrifice a baby in the first five minutes) while a number of furry creatures, otherwise known as “Ghoulies”, wander about... like this little fella: 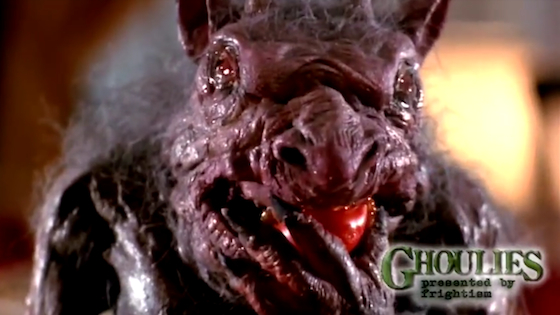 Holy hell look at him. He looks like Gizmo’s inbred cousin decided to mate with a rejected puppet from Labyrinth. I’m not sure if they are supposed to be the stuff of nightmares, or monsters-that-are-so-hideous-they’re-kind-of-cute. The ghoulies move like animatronics in a country fair’s haunted house, and their only way of speaking is to screech. I am not sure how many drugs the puppeteers took before creating these monstrosities, but suffice to say I’d be amazed if they’re still alive.

Many years pass and the baby (who managed to not be sacrificed) has grown into a young college student. He and his girlfriend inherit the creepy house where satanic rituals were once held, and instead of running as far away from it as possible, decide to have a party. The party is by far one of the greatest party sequences to ever be put on film, all for the following reasons:

- Two guys roll up on what appears to be a glorified go-kart. As everyone knows, all the best parties begin with go-karts.

- We are then introduced to Toad Boy, who shrieks out, “Toad Boy needs some sweetmeats for his tum!” None of the other characters seem to acknowledge the fact that Toad Boy is either (a) possessed or (b) schizophrenic and instead brush him off as being “quirky”. Out of all of the characters in the film, I was deeply concerned about Toad Boy and kept wondering when he would receive an intervention.

- Finally, we meet the party’s lone playboy, who may have the greatest line ever in pickup history: “They call me Dick, but you can call me Dick”

- And to top it all of, “break dancing” performed by a non-union Dana Carvey. This is, indeed, the ultimate party.

All of this is too boring for our host, who decides to corral everyone into the basement for everyone’s favorite party game -- the Satanic ritual! Naturally, everyone decides that watching non-union Dana Carvey bust out some more moves is far better entertainment, so they leave their host, who has brought the ghoulies to life! He gives them impossible names to pronounce, so from here on out, they shall be referred to as Bob, Stuart, and Kevin.

Our host gets bored with Bob, Stuart, and Kevin, so he decides to conjure up some little people to do his bidding (it wouldn’t be an '80s flick unless it horribly offended a marginalized group). He then decides to invite his friends back over for another party, so that he can sacrifice them to gain more ghoulies (or something like that). At this point, the film becomes truly ridiculous as Bob, Stuart, and Kevin decide to murder everyone. I had tears rolling down my eyes during this grisly scene:

My computer even started laughing at this!

I don’t want to give the rest of Ghoulies away, but in short, it’s hilarious. There is nothing even remotely frightening about this film, so even your wimpiest friend will be able to handle it. There is also no shortage of things to make fun of, so it is perfect for watching in a big group.

And if you enjoy the insanity of Ghoulies, remember that there is a Ghoulies II and Ghoulies III: Ghoulies Go To College (perfect for any toga-themed parties).