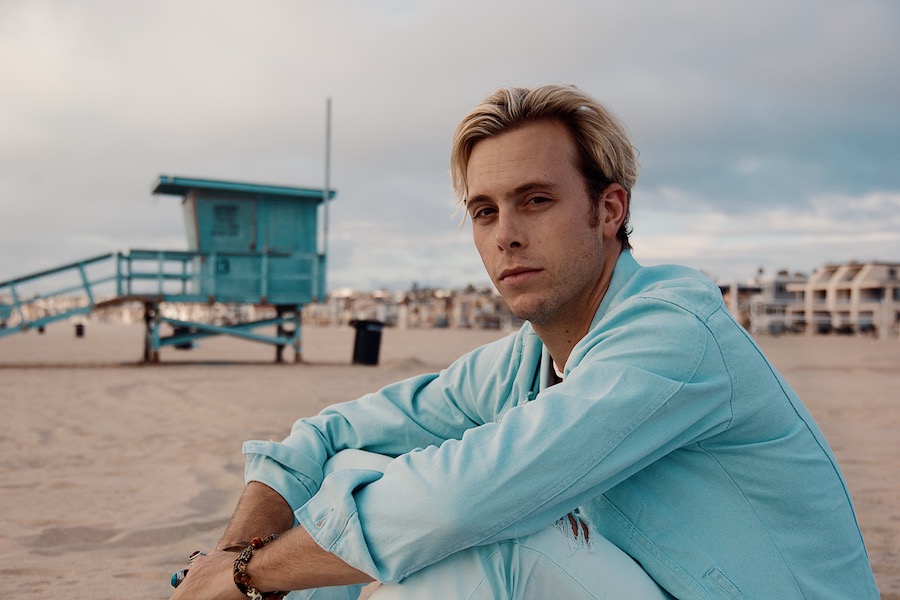 Alright friends, I have some questions for y’all. Very important. Do you like Piña Coladas? And getting caught in the rain? Are you into yoga? ... Do you have half a brain? Let me know!

Just in time for the start of the Summer Season, Riker Lynch has blessed us all with a new single from his new music project, Riker and the Beachcombers. Now, what’s one classic song you might think of when you think of Summertime, laying by the pool? I gave you some good hints earlier, so if you said anything other than “Escape (The Piña Colada Song)”, then what is wrong with you? Well, Riker has brought a brand new life to this 1979 Rupert Holmes hit, and it’s everything we could have ever needed.

Everything about this cover is so fun and fresh. From the background vocals to hearing that classic bassline to the guitar line in the chorus. It feels so classic but definitely has that pinch of new life inside it. You can’t listen to this song and NOT end up in a good mood.

For this cover, Riker collaborated with brother-in-lawChase Meyer, who played drums on the track. The song was also produced by Eric Sampson and was mixed by The Fund, while Riker’s cousin and frequent collaborator Gordy De St. Jeor created the album artwork.

Your Escape from Quarantine is here ? Escape (The Piña Colada Song) is now streaming everywhere! ? I want to say a big thank you to my homies who helped bring this studio version together: @eric_sampson_music hot neck music prod? my brother-in-law @chasegmeyer on the drums ? @_thefund for that rockin’ mix ? And of course, my partner in crime @gordydestjeor with the artwork ??? #RikerAndTheBeachcombers

This release comes after Riker’s previous hits, “Sex on The Beach”, “She Just Wants To Be Famous”, and “My Girl Rita”. Toss them all together and you have your perfect Summer soundtrack to listen to while chilling by the pool sipping a Piña Colada. They all have a perfectly beachy vibe that just transports you straight to a tropical island where you can soak up the sun.

Lucky enough for me, I actually got to hear Riker perform this cover this past fall, while he was on tour opening forO.A.R. I gotta say, it was pretty magical, and this song is a perfect fit for his vibe on stage. This is one of those songs that EVERYONE enjoys. I mean, can you HONESTLY tell me there hasn’t been a time where you’ve just burst into the chorus of this song? Exactly.

Riker has been leaving fans guessing about this release for a few weeks now, and we’re so excited that this is what he’s been teasing!

So many amazing guesses for this ? you’ll get the WHAT on Tuesday ? #RikerAndTheBeachcombers ??? pic.twitter.com/1HWMIn5nez

Now, with this being Riker’s 4th single release, we have to wonder... Is there an album on the way? A tour possibly? We have to hope that he’ll tour on his own soon too, right? Well, lucky for us, it sounds like Riker definitely wants to give the fans both of those things soon, so we definitely have much to look forward to from him!

BUT WAIT, THAT'S NOT ALL!
To step up the already fun single release, Riker also gave us a brand new music video, shot right at home during the quarantine. Shot by the pool in what seems like one long take (filmed and edited by cousin Gordy De St. Jeor), Riker is joined by brothersRoss, Rocky, andRyland, slapping on the sunscreen, jumping in the pool, and -- you guessed it -- making some Piña Coladas. Cousin Gil De St. Jeor also joins in on the fun popping in to give us that beloved guitar line. Honestly, what great idea for a music video! It totally works for the vibe of song and gives us all the taste of an escape from quarantine we’ve been longing for.
Riker spoke to Young Hollywood via Zoom to give us the deets on this music video and more upcoming projects to get stoked about. Check it out below!