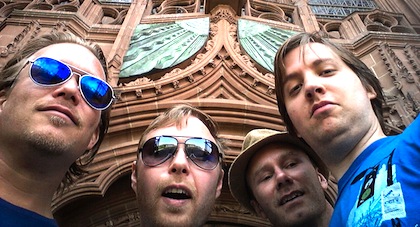 Slim Loris is an indie rock quartet from Stockholm Sweden that recently released a full length album entitled Love and Fear. The band first debuted in 2011 and spent some considerable time touring around last year in preparation for releasing album number three.

The band was originated by singer and bassplayer Mattias Cederstam and guitarist Robert Barrefelt in 2009, later adding on drummer Jonas Ellenberg and singer/guitarist Leon Lindström.

While described as an indie rock group, their sound has clear swinging pop elements as well as influences from 1960s invasion music.

The singing style on “Down”, the lead single off their most recent album, is interesting because there is a lot of layered harmonizing on the chorus, but when the lead singer is presented alone, he almost feels like he’s talking. That’s the part of the music that sounds the most like indie rock, while a lot of the instrumentals sound like major throwbacks.

“Head On the Floor” opens with a gentler more folksy sound but still retains the indie rock lead singer vibe. Shortly the background singers come in layering and harmonizing once again. They definitely have a specific and memorable sound.

When the group decided to shoot a music video for “Head On the Floor”, they chose platinum record-awarded director Jonas Hong Soo Eriksson to take control of the project. Eriksson has worked with artists like John de Sohn and Avicii.