'Deadpool' Trailer Promises Us a New Kind of Superhero We Haven't Seen On-Screen Before! 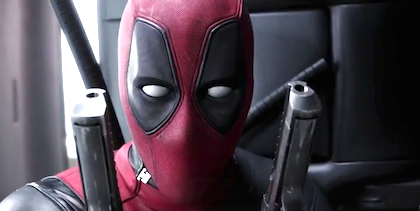 Everyone, it is time to rejoice, for I have wonderful news:

Yes, with the advent of a full-length trailer, we’ve come that much closer to the release of Deadpool, a film that nobody thought would ever get made after the titular character’s odd handling in X-Men Origins: Wolverine. Well the “Merc with a Mouth” showed the world just what he had to offer last night during an episode of "Conan", and I think it’s safe to say that everyone is pleased as punch with what they’ve seen. All the prerequisite stuff that could, should, and will come with a Deadpool flick seems to be in working order and on display -- We have a burnt-up Wade Williams (whose mouth has not been inexplicably sewn shut) showing the world just what a bad idea it is to make a living, breathing, fighting machine, who also carries a sarcastic streak 10 miles long, into an even more unstoppable force by giving him healing powers and sharp objects to play with. Well... a bad idea for the bad guys, that is, but a fine idea for the folks in the audience who have come to have a good old-fashioned action-filled time with Marvel’s funniest and most out-of-control character.

We’ve had plenty of humorous superheroes ply their trade onscreen in the past, and we’ve even had a couple of ultra-violent ones as well (Blade and Punisher, in case you ran out of straws to grasp), but we’ve never seen anyone quite like Deadpool sitting in the driver's seat of one of these Marvel products. His irreverence is legendary; his capacity for violence has no limit and he never, ever knows when to shut the hell up. This is a character that has encountered practically everyone in the Marvel Universe, and I don’t think a single person likes him. Well, we like you, Deadpool, old buddy old pal, and that will never change... unless of course the movie is bad, and then we’ll bury you under a mountain of Green Lantern discs.

This character will be interesting to see onscreen, as his sense of humor acts as a sort of mania that shields him from the consequences of his ultra-violent ways, and I’m wondering just how far they are willing to push the envelope in regards to this. Oh, and speaking of violence and other extremes, if that trailer seemed a bit too tame, then follow Mr. Deadpool’s advice and check out the red band trailer (NSFW, obviously). You’ll see first-hand that this is the polar opposite of any Marvel character we’ve seen thus far. Deadpool enjoys his abilities and the damage (lots of bullet and sword deaths) that they cause, and it will be interesting to see how they steer his character to keep him from tipping over into total villain territory. Obviously the wife or girlfriend shown in the trailer will act as a link to humanity. and I’m assuming his partner Negasonic Teenage Warhead will also partially serve in that capacity as well. As far as Colossus (from X-Men fame) joining this fracas, well... I’m assuming he’s there for moral support?

The bottom line here is that an assumable mortgage is no longer a matter of convenience in the current housing market, and with stock options at an all-time low. No, that’s not really the bottom line, although please let me know if what I said made any sense and I’ll pursue that degree in Economics that I’ve been eyeing. The real bottom line is that this looks like a funny and action-packed film that might take the normal underlying absurdity that comes with nearly every comic book film to new heights. Ryan Reynolds was born to play this part, and I’m glad he’s getting the second chance that he deserves to bring this stately character to life.

Deadpool arrives in theaters February 12th, so be prepared for much laughter and mayhem.