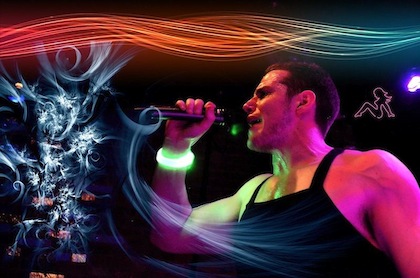 It’s not every day you come across a hip-hop/pop crossover artist who leads with his bold stance on religion and the desire for a separation of church and state. Artist Julian Rhine does just that with his song “No God Flow”, operating from the personal viewpoint that not only does the “god” of religions not exist, but that freedom, not persecution, is owed to those who take on alternative beliefs such as atheism and all forms of spirituality. Mix that with up the rest of his social opinions and add a high energy and unique hip-hop style and you’re starting to get to know Rhine.

Born and currently located in New York, Rhine originally went by the name of White Rhino when he started his career and recorded two albums under the moniker with his own beats. He eventually switched back to his own name as a sort of unmasking, if you will, to match the unmasking that he aims to expose people to through his music.

Rhine has performed at SXSW and opened for artists like Macklemore, Diddy, and Mobb Deep, and he has acquired quite a following on his music videos via YouTube. They’re colorful to say the least.

His song “Better than the Gun” is about guns obviously, anti-gun violence specifically, closing with some statistics about gun death rates. While the concept is serious, the song is super catchy and poppy with an edge and almost more fun than you even want it to be. Let’s just say I came back to it a few times. The video features Rhine as one part frat guy dancing with bikini babes and plastic guns with a dash of Jody Highroller grit mixed in. Not your average artist from whatever genre of music you assign him to.

“Stunning” has a more rock/hip-hop vibe and also specifically shows off his true rap chops.

The focus on civil rights-fueled rap makes even more sense when you find out that Rhine has worked for a law firm in Manhattan. A concerned bad boy in the name of social justice.