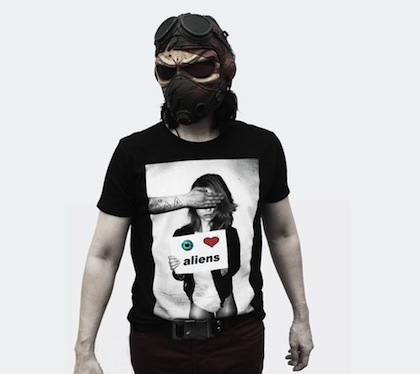 You can’t exactly predict what you are going to get from London-based EDM/dubstep artist Eluusif, and that’s part of his appeal. Elussif has an edgy approach to music making, and a slightly confusing or (ahem) elusive identity.

The artist’s website introduces him as an alien of a mere 4,008 years old (though not looking a day over 2,025), but he is currently on citizen on planet Earth. He does not like hostile robots and he does like Earth and talking cats, so he seems to be safely on our side.

Eluusif’s new self-produced EP entitled “Aliens Do It Better” was just released on April 8, with song titles directly commenting on pop culture such as “Justin Bieber is an Android” and “Hair like Skrillex”.

“I Love my Daft Punk” is a dance-worthy track with a robotic woman singing about her love of shopping and sex, repeating the line a few times in there: “I’m a cyborg but that’s okay / Almost human in every way.” Just human enough not to be off-putting. “You Should Be Mine” features a fully human woman providing vocals, and “No I Don’t Want to Be Your Facebook Friend” is a little heavier hitting on the dubstep and a bit more intentionally chaotic than some of his other songs. As for that aforementioned song about the Biebs, it’s kinda space-dreamy.

Besides just making the music, Eluusif is also a multi media artist who creates the animation in some of the videos for the music as well. Guess that makes sense that an extraterrestrial producer would be good at everything.