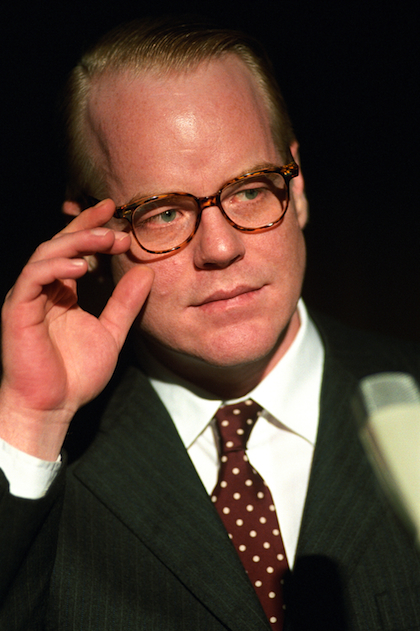 Here's an article I never wanted to have to write... at least not under these circumstances.

I never met Philip Seymour Hoffman, interviewed him, or even bumped into him on the busy streets of NYC, where we both called home. But I was, and still am, a fan, and that is all that I come to you today as. To say that Philip Seymour Hoffman was one of the greatest American actors working today is a statement that few would argue with. Plenty of articles will be written about him as the days go by, and a friend of mine pointed out that a few will probably try to compare him to some of the brilliant actors of yesteryear. I can certainly understand that impulse, as it is an easy way to quantify a person’s talent. But at the end of the day, Mr. Hoffman was not the second coming of Orson Welles, Clark Gable, or James Cagney. He was Philip Seymour Hoffman, a wonderfully talented man whom we’ll all miss dearly. For those of you reading this who are not too familiar with Mr. Hoffman’s body of work, here are four of his films that I highly recommend.

Doubt (2008)
This remains one of my absolute favorite Philip Seymour Hoffman performances. He plays Father Flynn, a priest working at St. Nicolas’s Private School in The Bronx during the 1960s. He is a shining beacon in the community and one who offers compassion and positive progressive ideas to a community that seems to be stuck in the Dark Ages, thanks to the leadership of Meryl Streep’s Head Sister Aloysius. But unrest threatens to tear this church community apart when Sister Aloysius accuses Father Flynn of an improper relationship with one of the students. It goes without saying that the title of this piece is the lynchpin for the entire story. How are we to believe that such a genuinely kind man could be capable of such an awful crime? As human beings, it is difficult to reconcile facts with what we truly want to believe in our hearts. Sister Aloysius is right to believe what she does, and at the same time, she is very wrong, because she was certain of Father Flynn’s guilt before any sort of evidence came to light.
The brilliance of Hoffman’s performance is that he so easily allows us to walk in the footsteps of those characters that do have doubt about his actions. We want to believe him because he presents himself as nothing more than a friendly and wise counselor to whom anyone could turn, and that in turn clouds our better judgement, regardless of the evidence present. And yet there is something else going on that we’re not quite sure about. Obviously, if this were not the case, then Sister Aloysius would come off like nothing more than a villain. That is where the true greatness in the performance lies -- his ability to walk that fine line and create the titular doubt that the movie speaks of.
Certainly this story has more relevance than ever in this advanced technological age, where social media allows millions of people to assume the roles of judges as they shout their opinions on such matters, not from the rooftops, but from the safety of their own rooms. Father Flynn tells a story about the evils of gossip in this film. He does so for the wrong reasons, but the story itself is true, and one that people should try to remember.
Capote (2005)
Often seen as his greatest performance, Hoffman won the Academy Award for Best Actor in 2006 for his portrayal of Truman Capote in this film, which tells the story of the famed author and the journey he undertook in order to document the accounts of a gruesome murder of a wealthy farmer and his family. His interviews with the killers and acquaintances of the victims would culminate into the writing of the book In Cold Blood. Here we see Hoffman at his very best, portraying an enigmatic man who took it upon himself to carve a place of his own in a hostile world that had already done it’s best early on to reject him, a man who was praised for his wit and talent and yet seemed to be cursed with a blindness that kept him from truly seeing the realities that were right in front of him. If anything, this movie, and Hoffman’s excellent performance in it, should be remembered as the film that finally launched Mr. Hoffman into a “leading man” status. Although, if you’ve truly followed his career, then you’ll know he showed that capability well before Capote.
Almost Famous (2000)
Now, I know that this film can hardly be called his, but you better believe that he left his mark on it. Almost Famous tells the story of a young boy named William Miller, who, like millions of other kids out there in the world (and in movies), has trouble fitting in. Eventually, though, his love of music and writing lands him a job writing for Rolling Stone, and he soon finds himself on the road with a band named Stillwater. Hoffman plays a character named Lester Bangs, who spends his time mourning the supposed death of rock 'n' roll. He believes that essence of what makes rock music great has been replaced by the allure of fame and a party-animal lifestyle. But aside from his constant lamentations of the state of music at that time, it is still a pleasure to watch him play a character that is so passionate about music. Aside from the personal journey of our lead characters, I like to think that this movie serves as not only a reminder of the great heights that music is able to rise to, but as a portrait of the music fans that are able to see beyond the glitz and glamour of their idols and truly appreciate the thing that is important: the music.
The Master (2012)
This is a tough movie to watch and one that everyone should. It’s the story of a mentally unstable naval officer, played by Joaquin Phoenix, who returns home from World War II and drifts along from one bad situation to another. He eventually meets up with Lancaster Dodd (Hoffman), the leader of a cult called The Cause, who offers to Freddie the promise of enlightenment and a happy life. Much like the belief system that The Cause purports, Lancaster Dodds, as a person, is a contradiction. He speaks of the human ability to find peace and purity, and yet he himself is somewhat of an angry and unhappy alcoholic. The scenes between Hoffman and Phoenix are absolutely astounding to watch as emotional connections are formed and then severed in a way that you don’t see often enough on the silver screen. Hoffman’s nomination for Best Supporting Actor for his role in The Master is a severe understatement in regards to just how damn good he is in this film.