Our Favorite Harry Styles Looks to Celebrate His 27th Birthday! 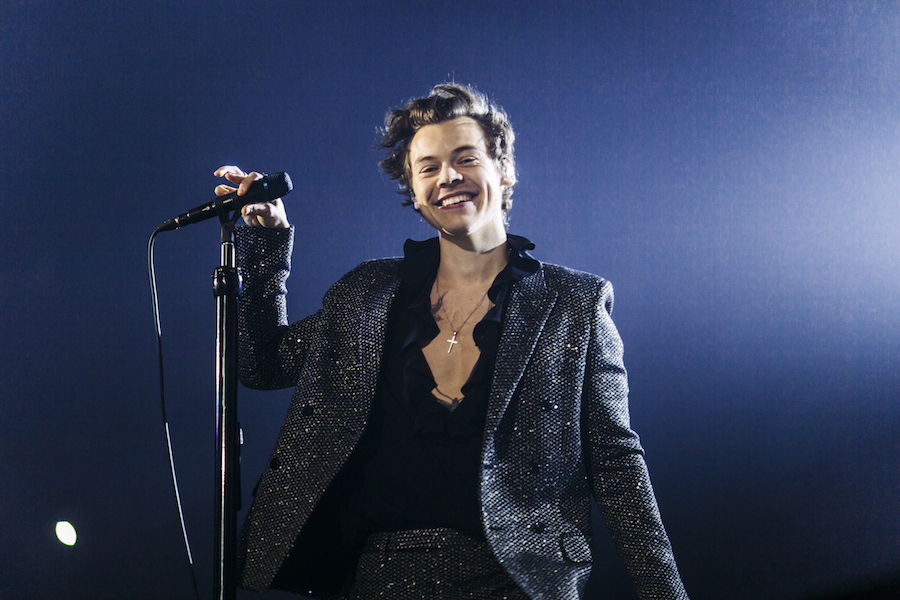 Today, February 1st, marks the man, the musician and fashion legendHarry Styles’s 27th birthday. He doesn’t need much introduction -- his titles of GQ’s Most Stylish Man of the Year 2020 and Vogue’s first solo male cover let you know his style is iconic, even if you’ve (somehow) never seen his amazing fashion journey over the years. It’s hard to believe he’s been in the spotlight for so long already, but every time he steps out into the public eye and dazzles us, we’re reminded that he could stay there for his outfits alone.

To celebrate this Aquarius’s 27 trips around the sun, we’ve gathered up some of the most iconic outfits that Harry has given us during his time in the spotlight!

1. More Stylish Than Most Airport-Goers

Airports are all about comfort, but somehow Harry makes comfort look way better than it should. His plane-chic is our normal loungewear. The long black coat, with these ultra-comfy looking velvety pants, paired with a plain white tee and classic black Vans is pretty basic – and yet, on him, it’s everything but. 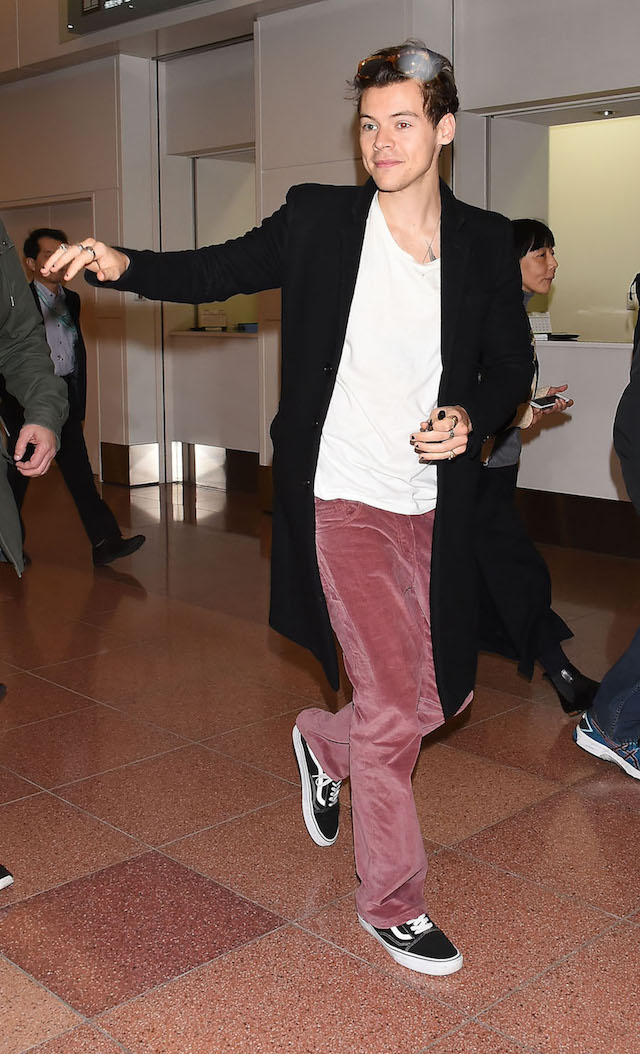 Harry has never shied away from matching prints, even during his1D years, but something about this look gives us so much edginess. I mean, this shirt alone has multiple patterns in it, but with the long hair, the tattoos and rings? It’s definitely one for the books. 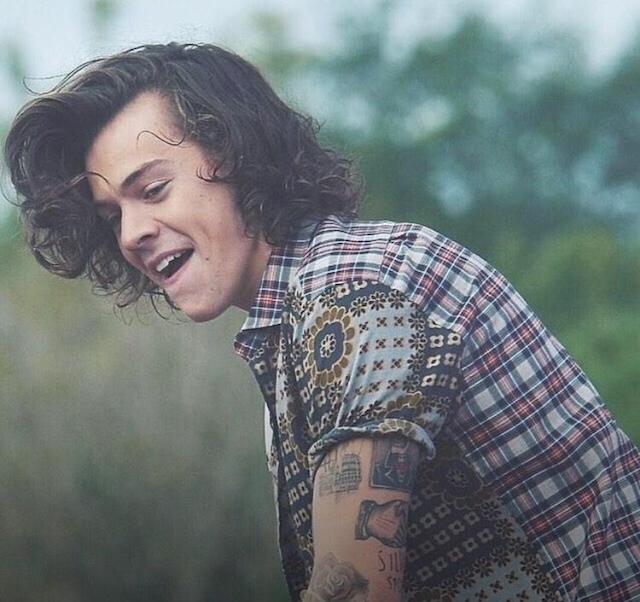 How can you make any tee-and-trouser look feel high-fashion? Add a pearl necklace and a shacket and suddenly you’re golden. I mean, it also doesn’t help if you’re GQ’s Most Stylish Man of the Year. But try it! 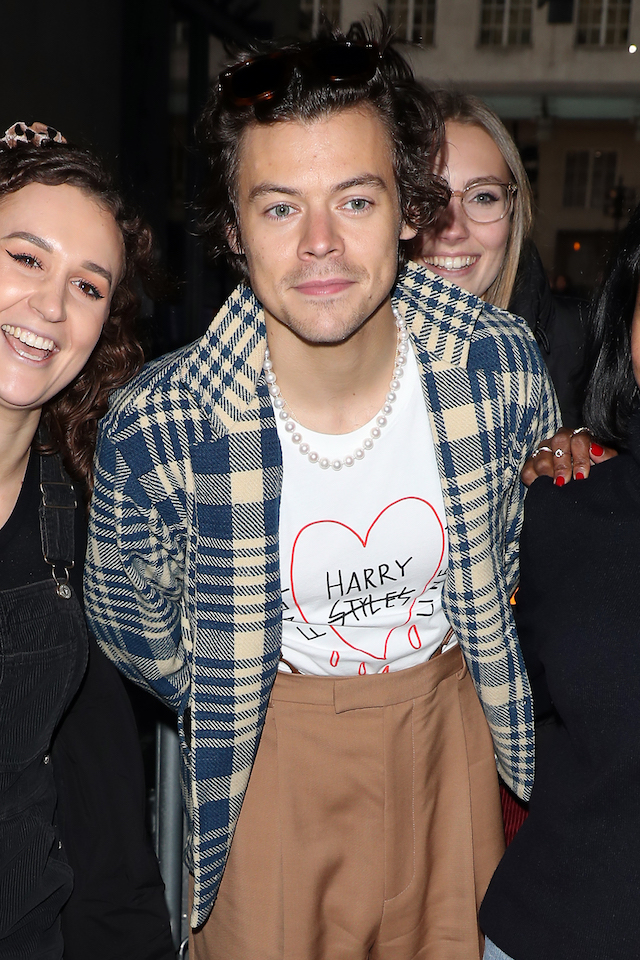 ( © Neil Mockford/GC Images/Getty Images)
4. The Arthur Meme, But Make It Fashion
If the Arthur meme were a polished, style-forward ensemble, it would be encompassed by this outfit and this outfit only. The polka-dotted navy/yellow sweater vest over the button-down shirt is a playful yet trendy combo, reigned in by these tailored pin-striped pants. And who says tattoos aren’t an accessory too?! 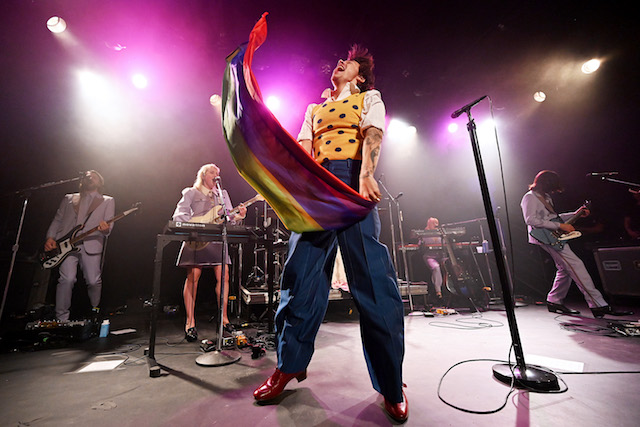 This look is groovy. The cropped, '70s-colored sweater vest over the vertical stripes of the button-down underneath is something straight out of vintage style, especially with the wide-leg brown paints to finish off the look. 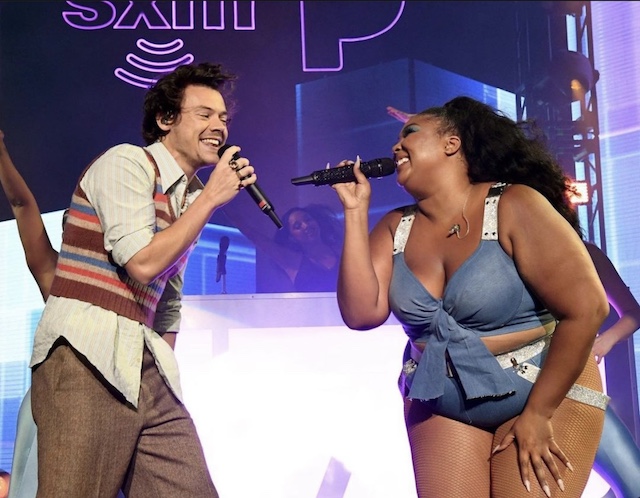 Harry’s done black-and-white floral suits before, but this time, the print is smaller, the pants are flared, and the shirt is black. He ties off the look with one of his signature exaggerated pussybow blouses, and it looks revolutionary. 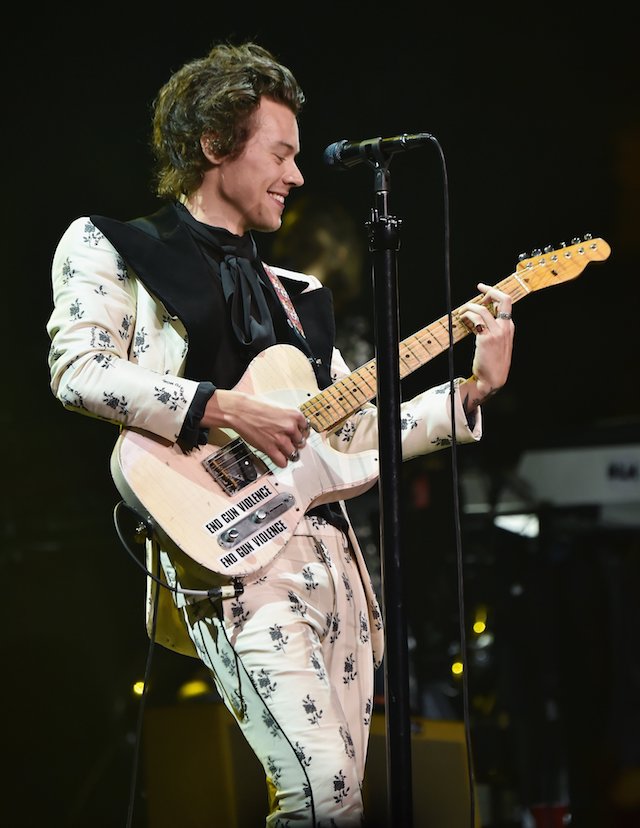 This extremely bold (though somehow classy) plaid red and white suit is not for the tame dressers, but it is extremely iconic. Matching suit sets are (and will hopefully remain) part of our lives, but what really gets me are these shoes. The heels are amazing, and quite literally elevate everything about this look. 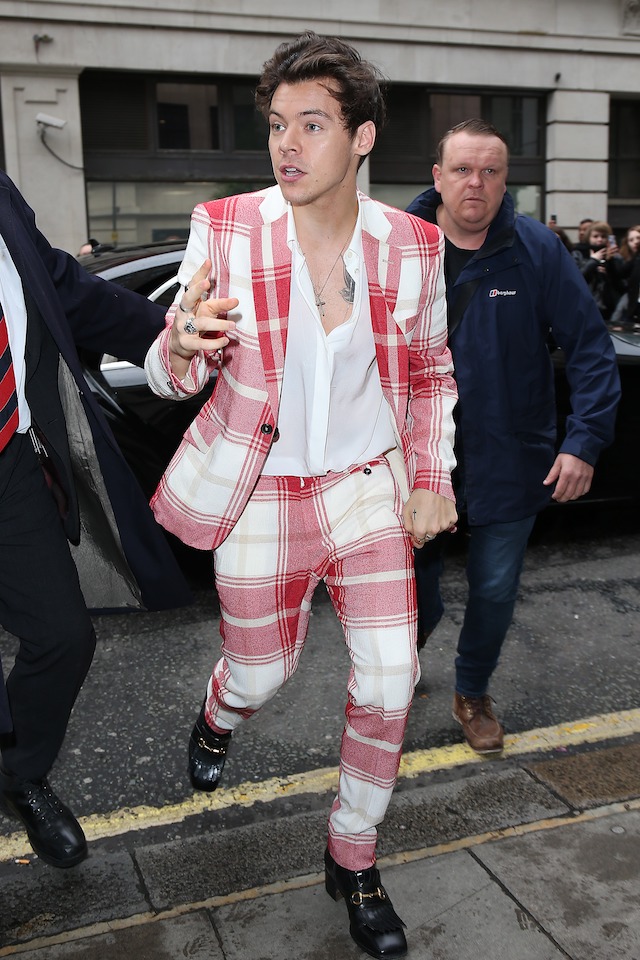 The only literal barrier in this outfit is the structure of this giant skirt. Otherwise, this look, featured in Vogue, not only looks amazing but really redefines feminine and masculine style and congeals them into one glamorous Harry look.

Flared pants and this bold black-and-red Gucci logo suit just make you want to dance. Or crown Harry the queen of hearts. Either way, it’s too fabulous of a look not to make this list, and Harry’s constantly giving us romantic-era vibes with his flowy tie-front shirts underneath. 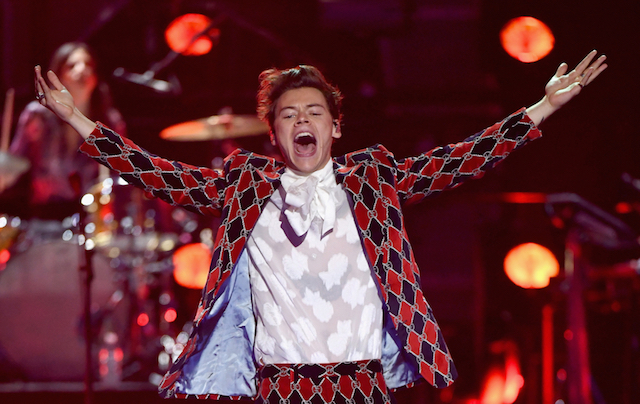 Harry is from the U.K., and Scotland is a part of the U.K.…so, if you think about it, he was born to wear kilts. How else could he rock this so well? He’s known for mixing prints, but this look is so elevated compared to some of his past ones (think 1D era), and the giant chunky gold belt? Only Harry could do it like that.

Harry’s surprise music video for "Treat People With Kindness" was a gift to us all – and so was this ensemble that he matched with "Fleabag" star Phoebe Waller-Bridge. These white, wide-leg pants have become a staple in his looks for his newest album,Fine Line (re: the cover image), but the sparkly blazer is a daring choice that really paid off over his trendy pastel-argyle sweater vest.

This may be a Halloween costume, but somehow this recreation of Elton John’s Dodgers baseball costume was made for him too. Elton and Harry similarly break fashion barriers and don’t shy away from the sparkle or the stand-out pieces, so a sparkly baseball uniform? Sounds about correct. 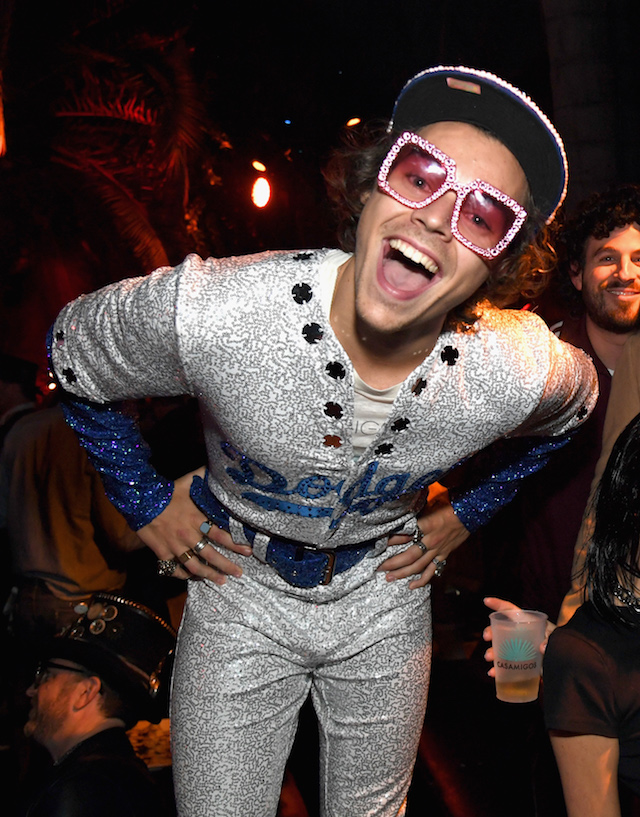 This list would simply not be complete without his sheer all-black Met Gala look. This one really broke the Internet in 2019, and I, as well as my fellow fashion fans, will never forget it. This gives a whole new meaning to high-waisted pants. And you can still see his tattoos! Talk about a classy, edgy look. 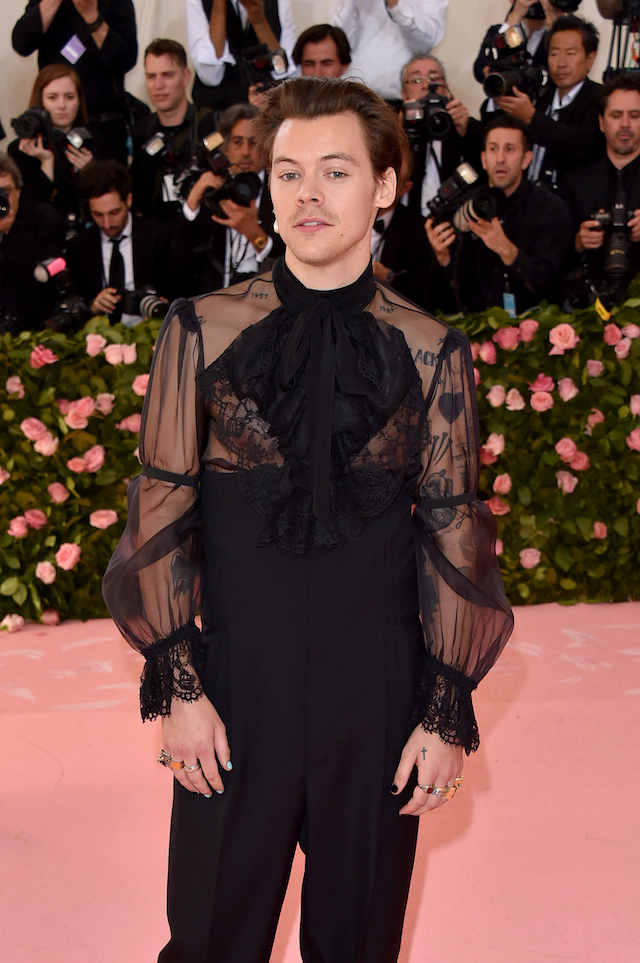 I will say more because how could anyone not?! It’s one thing to kill the game in traditionally masculine clothes and style them perfectly, but I have never seen anyone wear a dress like this before. It’s groundbreaking, it’s iconic... it’s Harry.

Harry’s really done it all. From serving elevated-casual streetstyle to defying “traditional” fashion practices on such a public scale like in his Vogue shoot, Harry has come a long way and really found himself in his own personal style. He’s become, with no exaggeration, one of the most stylish men in the fashion and music industry, and whether you’re a fan of his music or not, there is definitely something to be said about his eclectic, chic sense of style that sees no boundaries. Cheers to many more years of Harry’s style!