Our Favorite Celebrities Doing First We Feast’s Hot Ones Challenge! 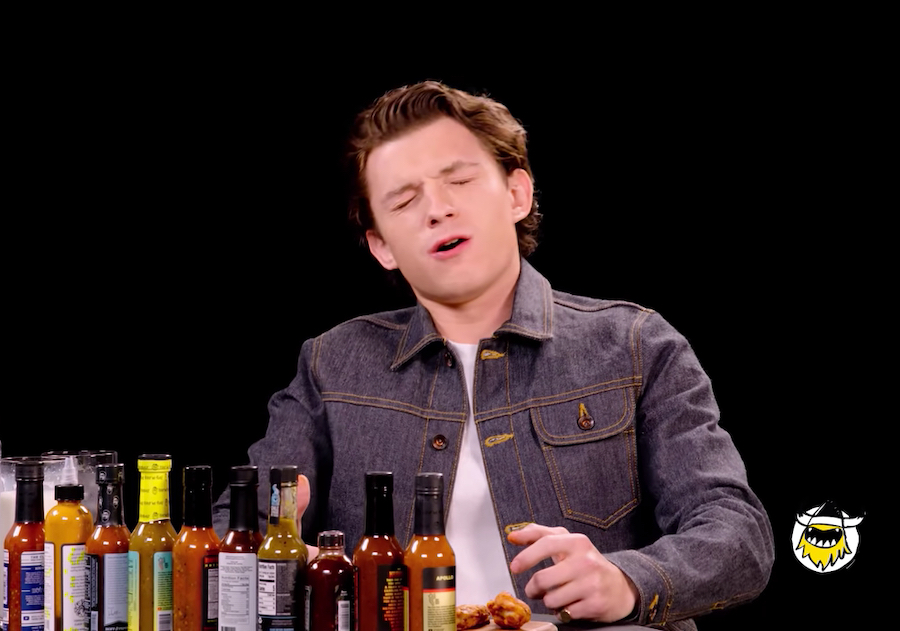 First We Feast’s Hot Ones Challenge isn’t just your regular everyday celebrity interview. It’s better! And spicier -- literally. Host Sean Evans has guests try a variety of hot sauces on chicken wings with each sauce getting hotter as they progress throughout the interview. You can only imagine how funny and entertaining this is to watch. Try answering a question while you can’t feel your lips or tongue!

Countless celebrities have participated in this crazy interview, but these are our favorite and funniest celebrities taking on this spicy challenge!

The "Stranger Things" star went into this challenge confident that she’d succeed and wouldn’t be bothered by any of these hot sauces, but let’s just say she may have spoken too soon! She was doing great up until the 7th sauce, which, as you keep reading, you will see most people break down at this point. But Millie’s breakdown was truly comedy. It seems like her way of coping while in distress is talking because she definitely became a chatty Cathy! “Why did you do this to me? I’m only 18, I’m only small,” was by far the funniest thing she said.

Oh! And we can’t forget about her co-star Noah Schnapp’s appearance at the beginning of the interview. Noah wasn’t much help, as he only tried the least hot sauce and took a sip of Millie’s saving grace milkshake, but we love the support, Noah!

We could predict early on how Tom’s episode was going to go once he almost started off with the hottest sauce instead of the least hottest sauce. Very chaotic. It seemed like he was a little too excited! Tom was brave throughout his challenge as he took multiple dips into all of the hot sauces, but that courage caught up to him soon! Just like Millie, after taking on Da Bomb hot sauce, it went downhill. “I feel like I’ve had Botox but no anesthesia” explained his pain perfectly. He did manage to answer some pretty interesting behind-the-scenes questions about his acting career and the movies he’s been in, but he was definitely struggling to get through it! Tom and his enthusiasm made this quite a funny interview to watch.

Keke and her personality definitely stole the show in this episode! Just like the rest of these celebrities, Keke knew for sure that she could handle what Sean had in store. And she actually held her composure for most of the interview, but as we know by now, that was just the calm before the storm! It hit her late, but boy did it hit! She was in denial when she felt the effects of the sauces and constantly blamed her sweating on the lights in the studio, but we know the truth, Keke! She was fanning herself and sweating uncontrollably, making sure that the First We Feast crew knew they owed her a keratin treatment for sweating out her hair! Now Keke has taken on this challenge not once, but twice. So, we're hoping to see her on First We Feast again for a good laugh!

We knew that this comedian was going to have us laughing throughout the whole interview, and without a doubt, after watching this, we shed a few tears of our own from laughing so hard. Before he even began trying the hottest of the sauces, he seemed to be looking around for help. I think he was regretting his decision to take on the challenge! It didn’t take Kevin long to feel the burn from the wings; before we knew it, he was taking his jacket and glasses off from the heat he was feeling! This hot sauce hit Kevin so hard he almost didn’t take the last (and the hottest) sauce. Come on, Kevin, you can’t give up! I’m not going to tell you whether or not he took it, though; you’re going to have to watch to find out. Although he was suffering, Kevin couldn’t do anything but laugh, and of course, we were laughing right along with him! I mean, he did say "Laugh At My Pain", right? Get it? Okay, anyways!

After watching Lorde’s episode, you’ll know exactly why she was one of our favorites. Not because she was in pain. Not because she couldn’t feel her face after eating these spicy hot sauces. But because she handled it like a pro! You would think Lorde was out for a casual lunch the way she was handling these sauces! We couldn’t tell whether or not Lorde was invited onto the show or Lorde invited Sean on the show! Sean was definitely struggling to keep his composure like Lorde. Don’t underestimate the ladies! I’m sure Kevin Hart would want a redo after seeing the way she handled this! I mean, besides a minor runny nose, she was doing great! No tears were shed and she barely took any sips of her drink. Lorde definitely took the crown!