One to Watch: Dilshad Vadsaria 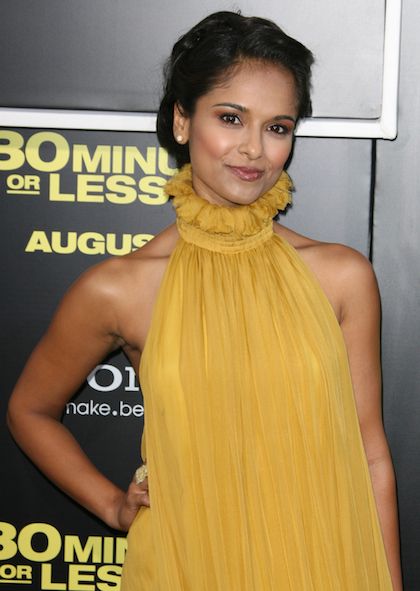 Audiences may flock this weekend to the R-rated comedy 30 Minutes or Less for the hilariously foul-mouthed antics of Jesse Eisenberg, Aziz Ansari, Danny McBride, and Nick Swardson, but they'll leave wondering, "Who's that girl?"
Answer: DilshadVadsaria. The charming and stunningly beautiful Pakistani-born actress plays Kate the love interest of Eisenberg's character, Nick, who has been secretly pining for her for years. But Kate is also the twin sister of Nick's best friend Chet, played by Ansari, leading to quite the little kerfuffle in Nick and Chet's friendship.
30 Minutes or Less is Vadsaria's first major feature film, but fans of ABC Family's "Greek," which ended its four-season run earlier this year, will recognize her as that show's Rebecca, the privileged and rhymes-with-witchy sorority sister who often tussled with the show's heroine, Casey (Spencer Grammer).
The 25-year-old Vadsaria was born in Pakistan but came to the States with her family when she was 6. She was pre-med at the University of Delaware but moved to New York City to study acting and then to Los Angeles, where she quickly landed her role on "Greek." Fun fact: she speaks conversational French, Gujarati, and Urdu.
Vadsaria hasn't yet booked her next project, but 30 Minutes or Less is sure to bring her a lot of attention in Hollywood. If you haven't seen it already, check out the trailer for the film below! (Vadsaria shows up around the 1:03 mark.)
(Image via Adriana M. Barraza/WENN)
- Andre Chautard, YH Staff