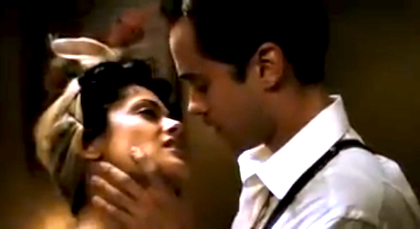 Just in time for Valentine's Day!

I’m sure you heard about the infamous couple Bonnie &Clyde who robbed and murdered numerous people during their crime spree in the early-1930s. Less popular than Bonnie & Clyde, but you still may have heard of them, were Charles Starkweather and girlfriend Carli Ann Fugate ("Chucky & Carli" never caught on as a team name) in the 1950s. If you haven’t heard of Chucky and Carli’s story, it served as the inspiration for some movies like Terrance Malick’s Badlands. But an even scarier and more morbid couple, known as The Lonely Hearts Killers -- AKA The Honeymoon Killers -- are getting their own television show created by Showtime to tell their story.

The couple in question consisted of Raymond Fernandez and Martha Beck, who, unlike their much younger counterparts Bonnie & Clyde and Chuck & Cali, both died in their 30s after killing a known 17 victims back in the 1940s. I say "known" because they gathered victims across the country during their travels by posting ads in the personal section of newspapers seeking single women, so nobody really knows how many victims total they collected. The Lonely Hearts name comes from the name of the personal ads in the newspaper. It’s not too different from sex ads you’ve probably seen on Craigslist or online dating in general. Referring to it as a "lonely hearts" ad is something some older people do, like my grandma when referring to how my cousin met his future wife on Match.com.

What set their story apart from the others is that they didn’t kill necessarily for any financial gain. They killed women because they were both, well, sociopaths. What makes this story even more interesting is that, when they were about to be put to death by electric chair, their last words were the following:

“I wanna shout it out; I love Martha! What do the public know about love?" – Raymond Fernandez

“My story is a love story. But only those tortured by love can know what I mean. Imprisonment in the Death House has only strengthened my feeling for Raymond." – Martha Beck

Despite falling into a category of psychology that dictates they aren’t capable of love, they both seemed to be. So this seems like it’ll be a darn good show. It’ll be dark and have a lot of human complexities in it, if it’s done right. I’m just wondering how they will handle the format. There are no details out just yet, and, unlike “Dexter”, these two won’t have some kind of serial killer "code" that people can rally around to help them root for these anti-heroes.

With all that said, there’s always a chance that they won’t actually be the protagonists. This isn’t the first time this story has been made for audience viewing, after all. Back in 2006, there was a film entitled Lonely Hearts starring Jared Leto as Ray Ray, Selma Hayek as Martha, and John Travolta as the detective looking to take them down (check out the trailer below). They were even hunted down in an episode of “Cold Case”, named “Lonely Hearts”, as well. (At this point, I’m hoping Showtime calls the show something other than “Lonely Hearts”; I’ll even take “Lonesome Blood Pumping Muscle Organ”.) With their story in the past being told with them as the antagonistic force, it isn’t too far out of the realm of possibilities that they will still be the bad guys in the Showtime series.

But their story certainly hasn’t been covered nearly as much as Bonnie & Clyde, and at the end of the day, it might prove to be more interesting. Especially for this day and age with the Internet and how people will agree to meet strangers in public through social media.