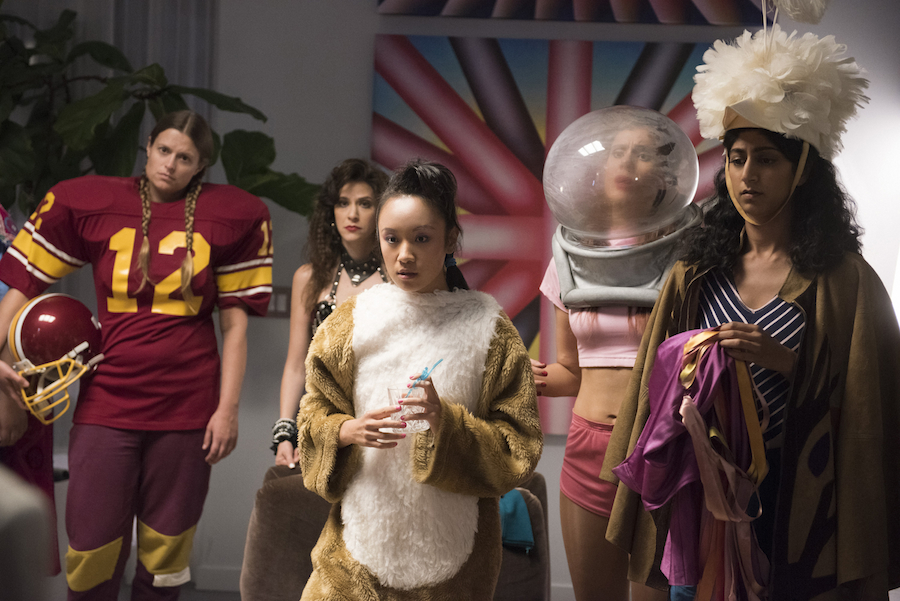 You see, back in the long, long ago known as the ‘80s, there was really only one show that was “must-see TV” for Yours Truly, and that G.L.O.W.: Gorgeous Ladies of Wrestling. It’s pretty much exactly was it sounds like – a group of women who wrestled. Oh but it was so much more than that!

G.L.O.W. was basically the WWF on speed and slathered in glitter and spandex. G.L.O.W. took the formula pioneered by the WWF and ramped it up to 11. Each G.L.O.W. girl had her own distinct personality, backstory, storyline, and super-cute outfit to match. They also had their own rap song, which they would perform before each match. Many episodes also included short little comedic sketches between matches, sometimes fake commercials for beauty products and sometimes bits of “plot” to flesh out a character’s storyline (but mostly just bad jokes and puns with a laugh track). It was, indeed, glorious.

In its heyday, G.L.O.W. lasted about 5 seasons from the late-‘80s to the early-‘90s, with many of the wrestlers themselves keeping the show alive in various forms over the years. It’s latest incarnation is as a scripted series on Netflix, brought to you by the folks behind “Orange Is The New Black” and is sure to become your Summertime guilty pleasure!

“GLOW” is a fictionalized account of how a group of struggling actresses came together to form the wrestling troupe and all the drama that went on outside of the ring as well! From what I can tell, all the names have been changed to protect the not-so innocent, but the essence appears to remain true to the story; methinks I’ll be able to suss out who is who even if they’re hiding behind different monikers. One of the former wrestlers, Ursula Hayden (who played Babe The Farmer’s Daughter) is involved with the show through a partnership with The GLOW Company, which she owns and operates. Plus, I happened to meet a bunch of the GLOW girls myself last October at L.A. Comic-Con (bucket list item achieved!), who were on hand to spread the word about the Netflix show and seemed very supportive of it.

So hey! What more do you need to know?? Hot ladies with cute outfits and interesting backstories beating the snot out of each other! See how it (sorta) all came together starting June 23!