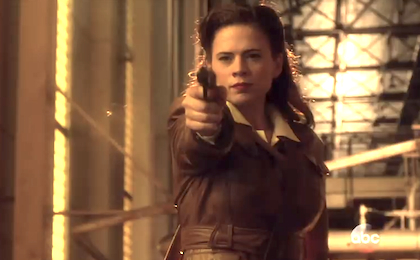 Last night, the 2-hour premiere of Marvel’s latest project, "Agent Carter", set out to enslave the minds and hearts of the men and women of this planet. I myself haven’t cared much for televised superhero shenanigans ever since “Batman: The Animated Series” went off the air back in the '90s, so I was somewhat understandably hesitant when approaching this newest installment to Marvel’s ever-expanding universe. For those of you who missed the premiere or just weren’t sure whether or not you should bothered, then allow me to deliver some good tidings. The first two episodes of “Agent Carter” were actually quite enjoyable and excellent examples how to do this sort of thing in the future.

Just what do I mean by that? Well, I will tell you that, right off the bat, I am familiar with the Marvel movies but that’s about as far as my knowledge of the franchise stretches. I do not follow the comics and I have not been following those incredibly good-looking folks from “Agents of S.H.I.E.L.D.”, so, for the most part, my knowledge of Ms. Carter and her adventures begin and end with the Captain America flicks. What scared me about this series was the fact that it could easily turn into a weekly promo for future Marvel projects or Captain America DVDs. Anytime one does a prequel or a sequel (this show is both), you run the risk of becoming so beholden to what comes before or after that you forget to actually tell a decent story. I’m not going to name any names, but when shows or movies are constantly "winking" at things that are not there, then what you essentially have is a bunch of producers tipping their hands so much that the floor is littered with aces and 8s. Basically I expected every other word out of everyone’s mouth to be about Captain America (a man who will not be actively involved in this series) or Infinity Stones or some other Marvel plot device that we have heard about time and time again.

Luckily, though, “Agent Carter” chooses to not be a slave to its predecessors in a way that signals creative bankruptcy. Instead, the show has been injected with an energy that comes from taking the things we expected to see and either expanding on them in a way that lends support to the current story at hand or using them as an emotional layer that, again, helps to drive the story forward and mold our characters as opposed to being used as a distraction to draw attention away from malnourished ideas. The very first thing we see at the beginning of the first episode is Captain America piloting the Hydra plane that will eventually lead him to his long icy slumber. Showing scenes from the first Cap movie is not unexpected, as it is where Agent Carter originates in the first place, but my concern was that that would end up encompassing half the episode.

Instead, we are given a quick montage that tells you succinctly everything you need to know about what this character has been through, and afterwards our show is allowed to proceed on its own course with a somewhat confident pace. It’s okay if you don’t know who Agent Carter is at the start of the show. That’s the whole purpose of the show -- to find out who this character is and how she played a part in keeping the world safe from all them evil folks out there during Cap's long hibernation. And so far, I can say that the show is a success due to a wonderful combination of nostalgia, good humor, and some fine performances from our lead actors and actresses. Hayley Atwell is thankfully very good in this as she is the well spring from which all of the show’s elements are drawn, including intrigue, suspense, sadness, and just plain fun. This series has done its homework, and the idea of Ms. Carter coming home from the War to less than fulfilling work was not an uncommon thing for our veterans back in the day (or even today, for that matter). Also, the show has not forgotten about the poorer attitudes that men had towards women back in the '40s, as many of our male leads tend to remind Ms. Carter and the audience of that every chance they get. It’s actually laughable to a point, but maybe the show is just trying to show how funny the idea of sexism is in the first place. That kind of thinking that lies outside of the comic book box makes me think that the showrunners really have more on their minds then packaging up the Marvel Universe nice and neat. The moment we start seeing too many Avengers references and such is the moment that the show will begin to steadily sink. But luckily we are nowhere near any sad times such as those.

“Agent Carter” has begun from a place of strength, and if the show can continue to stand on its own two feet without too much interference from the big wigs that can only see the future, then I think it will end at a place of strength as well. It is the show that seeks to expand on things that are only hinted at in some of the movies, but, again, is not handicapped as a result. Instead Marvel is offering us a richer and more explored version of their world and that can lead to some great things as long as they remember to tell some good stories along the way.