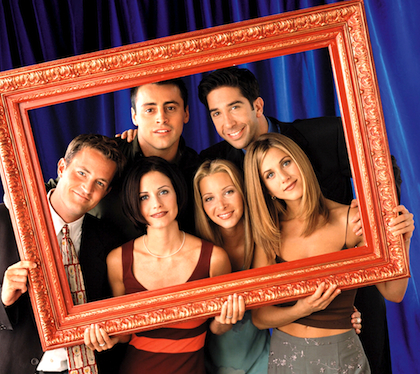 Serious question for all of you: Have you ever wanted to grab your friends, run to a fountain in the middle of the night, and dance around to “I’ll Be There For You,” by The Rembrandts? If so, then you might just be a “Friends” fan -- and, like me, you were probably overwhelmed with joy on January 1st to find the entire series on Netflix. 20 years ago (gosh, it doesn’t seem that long, does it??), “Friends” premiered on NBC and became a cultural phenomenon. Even though the show has been off the air for over a decade, any new sitcom that revolves around a group of hip, contemporary friends is still compared to the original “Friends”.

What many don’t realize is the sheer amount of work that went into “Friends”, and how much the show changed from its original vision. Here is my New Year’s gift to all you “Friends” fans out there -- 10 fascinating facts about your favorite friends:

1) When the show was first written, Monica (Courteney Cox) and Joey (Matt LeBlanc) were meant to be the main couple, not Ross (David Schwimmer) and Rachel (Jennifer Aniston). The producers noticed the chemistry between Schwimer and Aniston and decided to take the show in a different direction. Can you imagine how different the show would have been if Monica and Joey were the main couple? Or a couple at all?? I can’t even...

3) NBC was originally against the idea of Central Perk, the characters' favorite coffee shop, and wanted the the go-to hangout to be in a diner: Ugh, can you imagine Phoebe playing her guitar in a diner? It just wouldn’t be the same!

4) Chandler Bing (Matthew Perry) was originally written to be a girl, and when Lisa Kudrow first read the script, she thought Chandler was gay. Chandler was first written as a girl, and throughout the whole series, the characters constantly make jokes about Chandler being gay. In one memorable episode, his co-worker even attempts to set him up with another male co-worker, who is not interested at all.

5) There are actual Central Perk cafés in the world, inspired by the fictional Central Perk. There is now a Central Perk in downtown Beijing that was created by “Friends” fan Du Xin, who later opened an additional one in Liverpool. Sadly, there are no Central Perks in New York, where the show took place -- yet.

6) Lisa Kudrow was afraid of the duck, and Ross’s monkey was a troublemaker: Kudrow was terrified of the duck that appeared in Chandler and Joey’s apartment in Season 3. But she wasn’t the only cast member to have trouble with a furry castmate -- Ross’s monkey, Marcel (that was actually played by two monkeys), was dismissed after Season 2 when he threw a bra at Jennifer Aniston.

7) Would you have watched the show if it was called “Insomnia Cafe”? That was the title of the first pilot. It later went through a series of other names, including “Friends Like Us”, “Across the Hall”, and “Six of One”. “Friends Like Us” wouldn’t have been too bad, but if you're trying to sell a TV comedy, the last thing you want is to have the word "insomnia" anywhere near the title.

8) Lisa Kudrow based Phoebe on her co-star Jennifer Aniston, who is interested in “spiritual things”. I could see where this makes sense; Aniston is known for practicing yoga daily.

9) Every three seasons, the artwork in Central Perk was changed. This was to maintain the illusion of an actual, functioning coffee shop. I’m going to make a mental note to study the artwork in between the seasons a bit more closely.