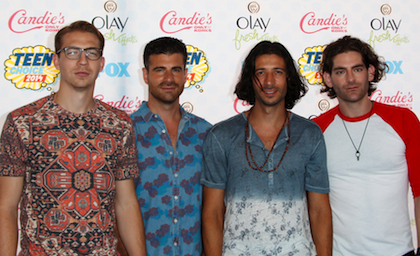 MAGIC!, the  Canadian reggae fusion band, is winning the title of American’s favorite with their song “Rude” as it takes to the Billboard charts with a #1 hit, spiking media sites such as YouTube with numerous amounts of covers and responses to the song and artists such as Kid Ink, Ty Dolla Sign, and Travis Barker making remixes of their own... I think we are on to something.

Magic’s "Rude" has cracked the Top Ten on music charts world-wide, but it only made to #1 here in America. It’s the 6th Canadian band to achieve such a feat and the first since Nickelback.

Our love for the underdog can maybe explain why MAGIC!’s "Rude" became #1 on the Billboard charts. We Americans love an underdog, and the band's reggae-inspired tune is filled with these themes -- The girl from the great family falls in love with a guy below her status, and the father, not happy about it, tries to tear them apart. In this situation, we all fight for that couple to win. Good thing MAGIC!’s lead singer Nasri decided to change the song from its original dark concept, about his not-so-hot relationship with an ex-girlfriend, into a more feel-good reggae song we could all listen and relate to. We've heard enough of those other songs already anyway. This version is refreshing breath of fresh air for America music lovers.

In general, the song’s catchy tune and reggae sound is nice and uplifting. The American audience was ready for a musical shift, and "Rude" is a perfect fit.  The lyrics can make everyone reflect to a time in their life where they would want to sing this song to an ex, a boss, or a friend. It even works for more present thoughts too, like when you are sitting in traffic on Friday and the guy next to you is excessively blowing his horn, then "Rude" happens to pop up on the radio station, and you blast it loud enough that the guy with horn problem stops and ends up singing along. That happens, right?

I dunno about you, but "Rude" makes me so excited for their next single off their Album Don't Kill Magic.

In the meantime, enjoy the band's performance of the song on last night's Teen Choice Awards!