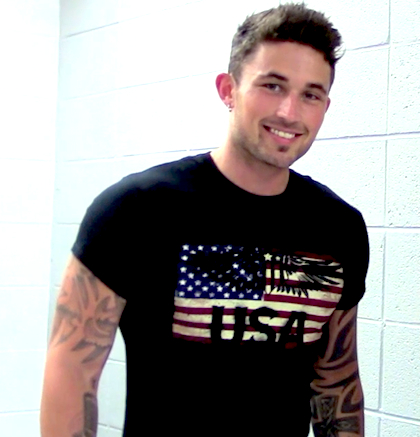 Luke Bryan, Eric Church, Jake Owen, and Rodney Atkins are just a few of the musicians rising country star Michael Ray has shared the stage with.

Michael was the Season 1 winner of CW’s “The Next: Fame Is at Your Doorstep”, a singing competition in which Joe Jonas, Nelly, Gloria Estefan, and John Rich served as celebrity mentors.

“John Rich is a buddy of mine from Big & Rich, and he told me, ‘The main thing is just to be yourself and don’t try put a lot of stuff on it. Just be you, and that’s what people will buy.’ That was probably the best advice you can get,” Ray told me in an exclusive interview.

Michael is currently on tour, and I caught up with him before his show at Fun Fest, where he opened for country legend Martina McBride.

“I haven’t met her yet, but I have met her husband, John, and so I’m looking forward to meeting her, and I’m really excited to see her show.”

When asked if Luke Bryan taught him any dance moves when he shared the stage with him, “No, I’m not a good dancer at all, I leave that to him.”

The Florida native was born into a musical family — his father and uncle are singers, and his grandfather is a guitarist. Ray got his start at the ripe age of 8, mostly with his family’s band.

In 2010, he released his first album, Who Am I. Ray is currently signed to Warner Bros. Records, and his next album is in production.

“We hit radio tour in September of this year, and then a single comes out shortly after that. We hit the road with Chase Rice in November to go from California to Ohio.”

Also be sure to check out our YH Studio interviews with "The Next" judges, Joe Jonas, Gloria Estefan, and Nelly, who tell us more about the concept of the show!