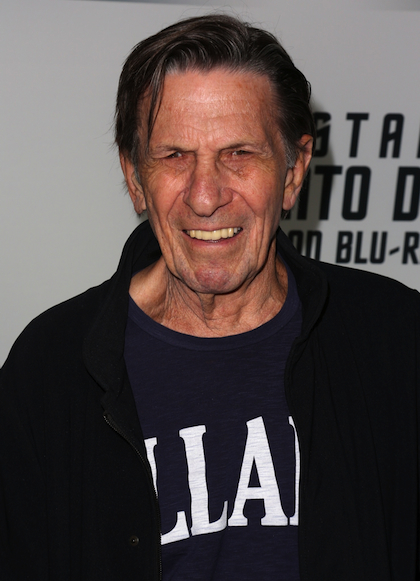 If you are still mourning Leonard Nimoy’s passing, then here is some silver lining for you: his son, Adam Nimoy, is currently working on a documentary to honor his late father. The documentary (or as I like to call it, a "Spockumentary") will be entitled For the Love of Spock.Zachary Quinto, who plays Spock in the new Star Trek films, will narrate the doc, and of course it wouldn’t be a complete Star Trek-themed documentary without some sort of inclusion of Nimoy's BFF, William Shatner.

Adam Nimoy has revealed a few details about the film, including that it will focus on topics covered in Leonard Nimoy’s books, I Am Not Spock and I Am Spock, (actual titles), as well as include dozens of audio recordings of Nimoy discussing what it’s like to be Spock. As of right now, Adam is working with traditional studios to finance the film, but he is also open to a crowdfunding project (which, considering how many Star Trek fans there are, this shouldn’t be a hard project to fund).

The younger Nimoy is already an accomplished director in his own right. He has directed episodes of “NYPD Blue”, “Gilmore Girls”, “Star Trek: The Next Generation” (because of course) ,and “Party of Five”.  This will be his second documentary; he is currently working on another documentary called Microwarriors: The Origin and the Destiny.

Are you excited for For the Love of Spock?