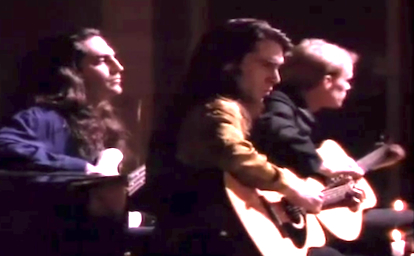 I love a good story-song. I love it even more when the corresponding music video is exceedingly literal in their faithfulness to said story.

Such was the case in the glorious ‘90s with one-hit wonder, Crash Test Dummies, and their one hit “Mmm Mmm Mmm Mmm”. The maddening simplicity of the title is certainly misleading, as the song itself it wrought with all sorts of bizarre imagery concering a few down-on-their luck kids – like a boy whose hair turned white after a car accident, a girl covered in huge birth marks, and a kid who’s forced to go a charismatic church (his plight apparently being “worse” than the previous two). It would seem that the title/chorus refers to the sound one makes when hearing these stories – not impressed enough to actually comment on the events but not wanting to be impolite by not responding at all. You know what I’m talking about. It’s banality put to music.

This song was released in 1993 and seemed to be the perfect segue from the bleak, grunge-laden early-‘90s to the more upbeat, radio-friendly late-‘90s. It’s ironic vibe is very reflective of the time period, as is the music video, filmed entirely in high-speed with some random blurring, uncomfortable tableaux, and primarily featuring kids and some unimpressed parents (likely the very people who would express the song’s title in casual conversation). And, of course, there’s lead singer Brad Roberts’s delightful mugging. This is perhaps the most ‘90s thing ever.

Strangeness aside, I legitimately always thought this was a very cool song, finding beauty in the perfectly trivial.

P.S. – While most of us only know the CTD from, literally, just this one song, the Canadian folk/rock group have been steadily making records since 1991, having released their 9th and most recent studio album, Oooh La La!, in 2010. Mmm Mmm Mmm Mmm, indeed.