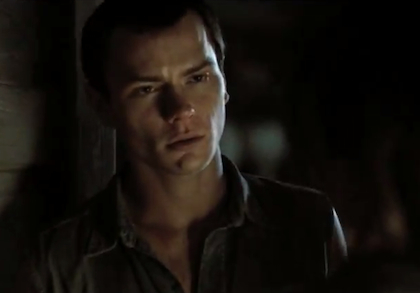 Many of you youngsters out there probably don't know too much about River Phoenix; you're probably more familiar with his little bro, Joaquin. Before there was Joaquin, there was River -- probably the closest thing my generation got to James Dean. Super cool, super talented... and gone way too soon.

For those that don't know, River Phoenix died of a drug overdose in 1993 at only 23 years old. He collapsed on the sidewalk outside of The Viper Room on the Sunset Strip while his friend Johnny Depp was performing onstage inside. River was found by his brother Joaquin (only 19 at the time), who called 911, but it was too late. Another brilliant, untapped talent gone too soon. Think Heath Ledger, and you have a good idea of what the film world lost that night in West Hollywood.

Now, nearly 20 years later, the last film that River was shooting at the time of his death is about to see the light of day. Dark Blood was only 10 days from completion when River died, and, naturally, the highly-anticipated project was halted and has basically sat on a shelf for 2 decades. But thanks to some outside funding, director George Sluizer has been able to piece the remaining footage together in the hopes of finally releasing the final performance of one of the most promising young actors of the '80s and early-'90s.

To that end, Sluizer has cut together a short trailer for the film in order to drum up additional support and buzz. The movie, co-starring Judy Davis and Jonathan Pryce, apparently sees River playing a disturbed and paranoid young man preparing for an apocolypse of some sort, and Davis and Pryce get sucked into his bizarre world. The trailer definitely looks creepy and intense... perhaps the creepiest part being River's appearance. The usually youthful and robust actor looks incredibly gaunt and withered away. This could very well be the result of an actor's choice... but it could also be indicative of his health at the time, which makes this doubly haunting to watch. Equal parts morbid curiosity and the desire to see the final work of an untapped genius makes me really keen to see this film completed.

As if happens, YOU can get involved and help get Dark Blood the completion funds it needs to see the light of day. Just go to this website for more info on how you can contribute. Then check out the trailer for Dark Blood below: