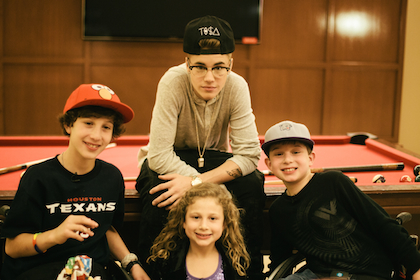 Show Your Hearts was the campaign seen and heard all around the world. You might recall your favorite celebrities tweeting pictures of themselves with their hands held up to symbolize their hearts. These images became a universal language, one that everyone could understand.

In July 2011, the campaign came to life when Justin Bieber found out about the Berry children’s most heartbreaking tragedy. Three beautiful kids – Peter, Aaron, and Willa Berry – lost their parents, Joshua and Robin, in a horrible car accident. Peter and Aaron were both left paralyzed from the waist down and face years of physical therapy and skyrocketing medical bills.

Justin launched the #ShowYourHearts campaign after learning about the Berry children from a member of his team who was a distant relative of Joshua Berry. Justin teamed up with his fans and superstar peers to bring awareness to the Berry children’s tragedy and urge people to help out in any way they could.

A year and four months after the accident first happened, Justin’s BELIEVE Tour made it’s way to Houston, Texas. Young Hollywood was there to capture the special moment when Justin got to meet the Berry children for the very first time.

Click below to see Justin Bieber show his heart.