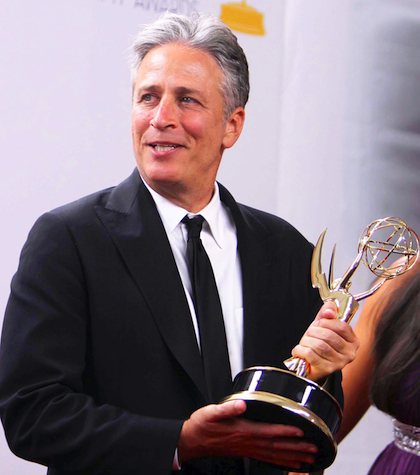 Believe it or not, there was a time in this country when you actually had to watch actual local news stations and national news programming to keep up with what was going on in the world... if you aren’t a fan of newspapers, that is. Visually, there was no real way to get the boring political stuff we do our best to care about but find uninteresting, interesting. Then a man stepped up to the challenge, a man with a vision, a man with charisma, a man with a great hairdo, a man whose sexual prowess is unmatched in this day and age, a man from the great mand of New Jersey… and that man’s name is Jon Stewart.

16 years and a million laughs (plus some tears) later, Stewart’s last night sitting behind the desk front and center at “The Daily Show” has come. (So close to what will be an entertaining Republican debate too!) Stewart may not have created “The Daily Show”, and he may not have been the first to tackle the fake news angle, and heck he may not have even been the original host of "TDS", but the man perfected the art of satirizing current events. He even threw the whole notion of fake news almost completely out of the window and slipped in real news, informing us without us even realizing it much of the time. Some of his former correspondents, like Stephen Colbert, John Oliver and now his successor Trevor Noah, have followed in his footsteps of giving people real news and making it entertaining with jokes.

It is sad to see Stewart go, but how about we think about the good times we had with him telling us like it is and reminding us that he is, in fact, Jewish:

Stewart wasn’t just “The Daily Show” though. Prior to his Comedy Central gig, Stewart was a stand-up comedian who eventually branched out into hosting such shows as Comedy Central’s “Short Attention Span Theater”, MTV’s “The Jon Stewart Show”, and another MTV show entitled “You Wrote It, You Watch It”, which included sketches from the comedy troupe The State. Needless to say that, by the time Stewart was hosting “The Daily Show”, his hosting chops were above par. At the time, though, making political and news satire was not something Jon Stewart was exactly known for on television, but his stand-up was very much in that vain. Now the rest is history, as sixteen years later Stewart has completely changed the game.

What does history hold for Stewart after his final show tonight? If you remember this past year, Stewart made his directorial debut with the drama Rosewater, which didn't exactly burn up the box office but was highly praised critically. Does this mean there will be more film directing in Stewart’s future? Could be, but I like to think that he might get more serious into politics. He’s lambasted plenty of other politicians over the years and is a clearly a smart man, so he’s got the stuff to help make this country better.

So thank you, Jon Stewart, for a decade-and-a-half of telling it like it is and keeping politicians honest (well, trying to, anyway). Check out the final episode here!